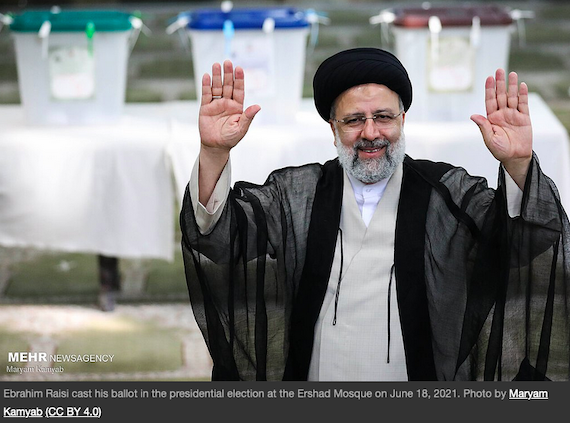 ( Globalvoices.org ) – The Islamic Republic of Iran inaugurated its eighth president on August 5.

Ebrahim Raisi, the former Chief Justice and head of the regime’s judiciary apparatus, won the presidential election on June 19 in a landslide victory.

Many observers both in Iran and internationally were hardly surprised at Raisi’s victory. Leading up to the vote, the regime took all the steps it could to ensure the Chief Justice would win at the polls. Just weeks before the election, Iran’s Guardian Council, a regulatory body controlled by Supreme Leader Ali Khamenei, swiftly and unilaterally disqualified the vast majority of Raisi’s opposition from the ballot, including many popular reformist candidates who had been gaining public support in the months prior.

Raisi was not so much elected as he was installed. His credentials as the quintessential regime insider made him the ideal candidate as far as the Ayatollahs were concerned. Indeed, there is probably no man alive today who has contributed more to the Iranian government machine than Ebrahim Raisi. Raisi’s career began at the tender age of 20 when he began to work in the fledgling government’s court system, an organization he would one day head. After participating in the 1979 coup that removed the Shah from power, Raisi was reportedly scouted by close aides of the Revolution’s founder Ruhollah Khomeini. He was quickly appointed to prestigious prosecutorial positions at the municipal and later regional levels. By his late twenties, Raisi was already the assistant prosecutor for the nation’s capital of Tehran.

Those early years set the precedent for Raisi’s long history of using the armed state to clamp down on the Iranian people. Raisi personally oversaw countless cases involving political dissidents and anti-regime activists, handing out harsh sentences including execution orders. Several eye-witness accounts attest to how Raisi was himself present at the torture and maiming of political prisoners his judiciary had incarcerated, many of whom were women and children. His experience as a prosecutor culminated in his most infamous crime, his participation in the 1988 Massacre in which thousands of prisoners from anti-regime groups were executed in secret over a period of several weeks. According to human rights groups that investigated the incident, Raisi, at the time 28 years old, was part of the four-man panel that issued each and every death sentence. According to Iranian government defectors, the Massacre resulted in as many as 30,000 deaths, with thousands more suffering torture and other forms of violence that left many permanently disabled.

With this demonstrated record, it is clear why the Ayatollahs chose Raisi to head the Iranian government. Simply put, Raisi has become an expert at using the power of the state to quell dissent and crack down on anti-regime activity. As laid out by the People’s Mujahedin Organization (PMO), the Paris-based Iranian opposition group, Ebrahim Raisi has been directly involved in every event of state repression in Iran for the past three decades.

Ebrahim Raisi cast his ballot in the presidential election at the Ershad Mosque on June 18, 2021. Photo by Maryam Kamyab (CC BY 4.0)

In the recent period alone, as nationwide protest movements have picked up traction among the Iranian public, Raisi has been at the head of the judiciary and security-force collusion to brutally put down anti-regime activity. Raisi was behind the Kahrizak Torture scandal in 2009 in which activists involved in countrywide demonstrations against alleged election corruption were jailed and tortured in the Kahrizak Detention Center in northern Iran. It took until 2016 for the regime to formally recognize the incident.

As the Judiciary Chief, a position he held until being elected president, Raisi personally oversaw hundreds of executions, including of 251 people in 2019, and 267 people in 2020, and scores of executions over the past year. As Amnesty International reported, under Raisi, “the death penalty was increasingly used as a weapon of political repression against dissident protesters and members of ethnic minority groups.” One particular case that drew international outcry was the brutal execution of Iranian sportsman and wrestler Navid Afkari, who was convicted of “war against the regime” for his involvement in anti-government protests.

In 2019, when Iran saw its largest wave of unrest since the Revolution, Raisi was at the forefront ensuring violent repression of activist groups. He worked with police and paramilitary units, offering them carte blanche to use whatever means necessary to put down demonstrations and deter more activism. Under Raisi’s directive, thousands of men, women, and children were arrested in mass round-ups, and many were subjected to torture, enforced disappearance and other harassing and violent treatment.

The clear signal being sent by Raisi’s “election” is the regime’s intent on even ramping up its repressive tactics. As the PMO wrote in a recent publication, the regime must keep up the oppression since it knows “no other way of holding back dissent.” The Ayatollah’s constant fear of another uprising makes state violence and brutality absolutely necessary.

The regime has made its position clear. And with the ascent of Ebrahim Raisi, the ferocity of regime repression will only get worse.