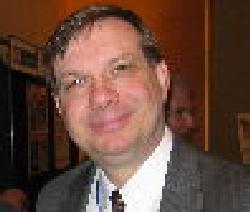 This is day three since John Fund of the Wall Street Journal did a nationally-read hatchet job on me in which he made up quotes and falsely attributed them to me. He has still not retracted, and has not apologized. Neither has The Wall Street Journal. Hint: I wouldn’t want my business news or investment advice from a newspaper that just makes things up. I have complained directly to the Opinion Journal. But still nothing. The lies are still out there, online, damaging my reputation.

Update 4/25/06: Thanks to all who wrote. You had an effect. The WSJ finally rather ungraciously admitted the error. I am told they almost never do so, so it is a big win.

Fund’s lies and smears are typical of the far right, which controls so much of corporate media. Much of corporate-owned “news” is increasingly just bubbly entertainment, put on in a ceaseless search for at least 15% profits (on news!). As Tom Fenton has argued, corporate news dropped the ball in the 1990s on covering al-Qaeda (props to the hardy few like Peter Berger and John Miller, among a handful who did the hard work), and therefore bears significant responsibility for allowing America to be blindsided on September 11.

Now it has largely gone back to business as usual. They almost never report on Afghanistan or the regrouping of the Taliban. Do Americans even know that we have 18,000 troops in that country. Do citizens of the US even know that brave Canadian troops are risking their lives against the neo-Taliban and al-Qaeda in Qandahar, and that some were recently killed? No. Because it mostly isn’t being covered in the mass media inside the US. It would not generate 15% profits. Nothing will, but sensationalism and lies.

The lies have even corrupted our political process. Indeed, Senator John Kerry could never have been swiftboated during his presidential bid unless corporate media jumped aboard and gave all the falsehoods enormous play. They threw the election, folks. Those editors and journalists knew that the swiftboaters had no case. The media caesars put them on anyway, to play lions to Kerry’s Christian. Even Kerry was unable to get his message out. A humble college history teacher has as much chance of winning against the billionaire smear machine as a union organizer has of keeping her job in a Walmart.

(When I complain about Faux “news” often being mere propaganda, Fund accuses me of “intolerance”!) If it weren’t for this little blog, I wouldn’t even have had a way of challenging Fund’s and the WSJ’s falsehoods. (And, if the media corporations can take “net neutrality” away from us, they’ll remove that avenue of reply, too.)

If it were just a matter of ruining my reputation with false quotes, the issue would not be world-shaking, though it is a sad day for America when giant corporations can just crush red-blooded Americans at will. But the paid-for lies of the John Funds of the world have profoundly endangered the security of the United States by plunging it into a quagmire in Iraq. 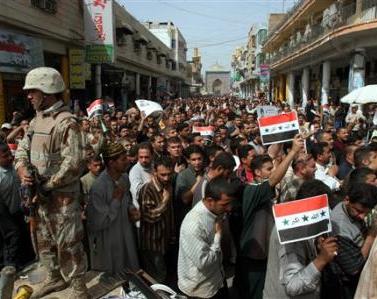 Iraqi Shiites protest against United States and against Terrorism, March, 2006.

And, the accelerating threat of global warming cannot be addressed because people like Fund shout the evidence down with their cable- and satellite-provided megaphones– provided by Rupert Murdoch and General Electric.

Not only was Fund wrong about the “weapons of mass destruction” threat in Iraq, a mistake that has cost the US nearly 2400 lives and 14,000 severely wounded, but he is wrong about the threat of global warming. I found that on January 25, 2003, he managed to be wrong about both things all at once! Here he is on Hardball in late January, 2003, urging on the Bush administration Titanic toward twin glaciers!

MATTHEWS: John Fund, do you know what turned him [Colin Powell] around from a man who is perceived by the public to be dovish to a man who is the hard line fellow, very much like his fellow Cabinet members, Rumsfeld and Dick Cheney?

You know the same people who believe that global warming is absolutely proven and they’re not going to listen to anything else are the same people who will accept absolutely no evidence that Saddam Hussein is hiding something and including weapons of mass destruction. Colin Powell basically finally threw up his hands and said we have to act because the alternative is to let Saddam Hussein win the game, set and match, and the world cannot be blackmailed that way. ‘

Actually, Iraq let the UN inspectors in. They inspected 100 of 600 sites designated as suspicious by the CIA. They found nothing. As Fund was talking, Iraq had complied with Bush’s demand. Fund wanted to go to war anyway.

He castigated those, like myself, who refused to believe that Iraq formed a danger to the US, as being like people who believe in global warming!!

Why be wrong once when you can be wrong twice? Or, if you throw his manufactured quotes attributed to me into the kitty, three times. Indeed, you begin to wonder if Fund ever gets anything right.

In fact the melting of the ice caps both at the arctic and the antarctic has accelerated beyond scientists’ expectations.

Mr. Fund should explain to the people of New Orleans about how warming seas are a myth.

A humble college history teacher is like a canary in the mine. If he starts being strangled for air, it is a sign that we all are in grave danger. People like John Fund are taking our country, and our world, down into the deadly methane of propaganda and falsehood.

Here is my complaint on Day 1.

This is my complaint on Day 2.

James Wolcott weighs in, too.

Corrente Wire makes the interesting point that my blogging may be part of the issue here.

Glenn Greenwald on the background to the controversy.