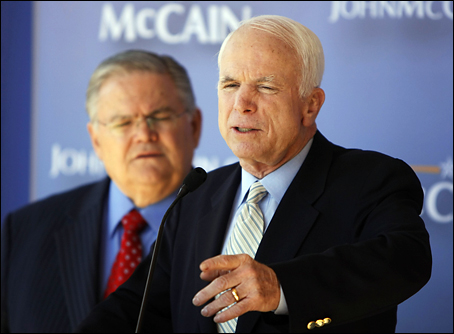 Breaking News: CNN is reporting that McCain has just repudiated Hagee, specifically over these remarks on Hitler as God-sent hunter of Jews. Now, what about Rod Parsely? Or is that OK? And, when will AIPAC, JINSA, etc. also repudiate Hagee and his ilk?

Hagee says that God sent Hitler as a “hunter” to track down the Jews and kill them, in accordance with the Book of Ezekiel, and that the Jews in Israel currently have “dead souls.”

Hagee elsewhere condemned the Roman Catholic church as being like Hitler and ‘drinking the blood of the Jews.’

McCain is of course not close to Hagee. But if you ask someone for his endorsement and say you are proud to have it, you are closely associating yourself with him. McCain has to come clean on this. He still says he is glad to have Hagee’s endorsement.

He keeps hugging the most objectionable people.