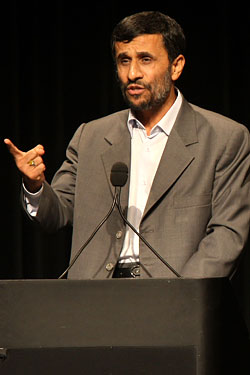 At least 35 persons died in political violence in northern Iraq on Thursday. Suicide bombers killed 20 persons and wounded dozens in three attacks on police and recruits, with the largest attack at Sinjar. In Tikrit, Awakening Council tribesmen armed and paid by the US shot to death 15 jihadis in a tanker headed for Baghdad with suicide belt bombs when the driver and his passenger opened fire at a checkpoint. (Details below).

Al-Hayat reports in Arabic that Adil Abdul Mahdi, one of two Iraqi vice presidents, is in Tehran for a visit with President Mahmud Ahmadinejad. Abdul Mahdi, considered close to the Americans in Baghdad, is nevertheless also a leader of the Islamic Supreme Council of Iraq, the leading political party that was founded in 1982 in Tehran for Iraqi expatriates by Ayatollah Ruhollah Khomeini.

In Tehran, Abdul Mahdi spoke at a news conference with Ahmadinejad, saying he considered the Iranian president’s recent trip to Baghdad “a turning point in the history of the relations between the two countries.” He added, “The people and government of Iraq have long valued Iranian support for Iraq and its role as the path of their progress.” He said that his visit to Iran is for the purpose of “discussions of economic issues and services, as well as political and security matters.”

Gee, that’s not how the US talks about Iran. Yet here is Iraq’s elected Vice President, and he doesn’t seem to agree with John McCain’s characterization of Iran’s role in Iraq.

For his part, Ahmadinejad said that the “enemies” are afraid that Iraq might turn into a base against global arrogance (i.e. Western imperialism). He said the Iraqi government and people have a bright future.

Christopher Cerf and Victor Navasky at Tomdispatch.com examine John McCain’s actual stances on the Iraq War from 2003 and find that he didn’t actually initially oppose it and that he sounded at every point just like Bush. At the same site this week, Frida Berrigan on how the Pentagon has been turned into the Swiss Army Knife of bureaucracies by the Bush administration.

Tom Engelhardt points out that “the U.S. military has, in the last two months, fired at least 200 Hellfire missiles into the Iraqi capital, according to the Washington Post, most of them into Sadr City, the vast, heavily populated Shiite slum in east Baghdad. (“Just six” had been used in Baghdad in the previous three months.)”

Well no one is more happy than I that US military casualties are way down in May. But apparently it is because US troops didn’t have to fight in Sadr City so much, because we like bombed it back to the Stone Age, with all those civilians densely packed in there. And no wonder the Mahdi Army suddenly decided to let al-Maliki’s troops in. 200 missiles is a lot of missiles to rain down on your extended family.

The proselytizing Marine at Fallujah has been removed from the checkpoint and is under investigation. Apparently it was just one guy flying solo. It will take some time to repair the damage he did.

Gunmen throw a hand grenade in a Kia minibus as both vehicles were driving down Muthanna Military Base Street heading towards Alawi al-Hilla, central Baghdad at 10 am Thursday. The hand grenade detonated severely injuring 6 civilians.

2 unidentified bodies were found in Baghdad by Iraqi Police today. 1 in Saidiyah and 1 in Palestine Street.

General Manager of a private Iraqi oil company, Hussein Ali Abdulhussein survived an assassination attempt in al-Masbah neighbourhood in Karrada at around 9.30 pm. He is now in the neurosurgery hospital being treated for his wounds.

16 recruits killed and 21 others, some severely injured when a suicide bomber wearing an explosive belt detonated in a crowd of young men queuing in front of the Directorate of Police in the southern part of the town Sinjar, 120 km to the west of Mosul at 10.30 am Thursday. They were applying for positions in the police force. The Chief of Police of Sinjar has been deposed as a result of this incident.

2 policemen killed and 10 people, 5 policemen and 5 civilians injured when a suicide car bomber detonated targeting a Rapid Response Force patrol in the Ghabat area to the north of Mosul. The suicide bomber was dressed in police uniform and driving a police vehicle, said the commander of RRF battalion. The explosion also caused a great deal of material damage in the area.

A roadside bomb targeted an Iraqi Army patrol in Bizayiz Buhruz, 20 km to the south of Baquba at 10 am Thursday, killing 2 servicemen.

A roadside bomb exploded on he main route between Khanaqeen and Qara Teppa 70 km to the northeast of Baquba seriously injuring a man and his son. Rasheed Nebeel and his son Husam are both in hospital.

A tank truck was stopped at a Sahwa checkpoint at the northern entrance to Tikrit. The truck that was headed towards Baghdad was stopped and the driver was asked to open the tanker for searching. Instead of complying with the order, the driver and his assistant took out weapons and started shooting. The Sahwa members and the security forces returned fire and killed them both. Then they opened the tanker and found at least 10 men with explosive belts on. They took them out and executed them.” ‘