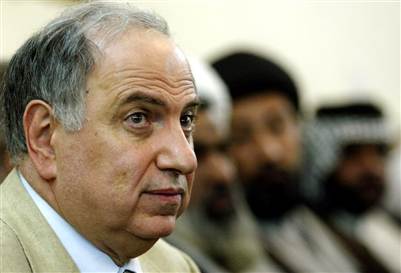 Deputy Prime Minister Barham Salih said that the al-Maliki government is beginning to think about the “time horizon” of the US troop presence in Iraq. That terminology is awfully close to a request for a timetable for troop withdrawal. PM al-Maliki has repeatedly said that Iraqi militias and army can handle the security problems themselves within 18 months.

Ahmad Chalabi, meeting in Tehran with Speaker of the Iranian Parliament Ali Larijani, commented on the Status of Forces Agreement being negotiated by the Bush administration with the Iraq government:

‘ The INC’s Chalabi retorted that granting immunity to US military personnel from prosecution under Iraqi law is baldly unacceptable. “The vast majority of Iraqi people and authorities oppose the security treaty and regard it as contradictory to Iraq’s sovereignty and security.” Chalabi stated the treaty is counterproductive for Iraq in the long term and what the US is seeking is a binding bilateral agreement for the ongoing presence of its forces in Iraq whose UN mandate expires on December 31.’

Then Chalabi sat there while Larijani warned the US against “adventurism.”

I don’t think Chalabi likes the US very much. What is he doing discussing a bilateral US-Iraqi agreement with Larijani in Tehran? And let’s see, I’m trying to remember whose idea it was for the US public to give Chalabi tens of millions of dollars and to try to put him in power in Baghdad . . .

‘ McCain welcomed Ahmed Chalabi, leader of the Iraqi National Congress (INC), to Washington and pressured the administration to give him money. When General Anthony Zinni cast doubt upon the effectiveness of the Iraqi opposition, McCain rebuked him at a hearing of the Senate Armed Services Committee.

In 2003, McCain joined four other Republican senators and asked Bush to “personally clear the bureaucratic roadblocks within the State Department” that blocked increased funding for the Chalabi’s group. Also that year, McCain said of Chalabi, “He’s a patriot who has the best interests of his country at heart.” ‘

Al-Hayat reports in Arabic that as the 18 October date for the provincial elections approaches and parties begin campaigning, Grand Ayatollah Ali Sistani has rejected the use of his name or picture in campaign materials for any party.

The controversy stems from the decision of the Islamic Supreme Council of Iraq to run as a stand-alone list in the provincial elections and its announced intension to use Shiite religious symbols in its campaign. It has been criticized on this score by the Sadr Movement.

Al-Hayat says that tribally based party lists are now campaigning in Diyala Province and hope to do well.

It also reports skepticism in some quarters about whether the provincial elections will really be held before 2009, given that disputes about them still rage in Iraqi politics.

Meanwhile, the dispute between the al-Maliki government and the US military in Karbala province, over the US operation that killed a relative of Prime Minister Nuri al-Maliki, has worsened, according to McClatchy. Hannah Allam writes:

‘ Kurdish legislator Mahmoud Othman called Friday’s operation “unacceptable” and had strained relations between the countries. “This is a big embarrassment for Prime Minister Maliki because he was in that area two days before the incident, telling his people that we are the masters in our country and the decisions were ours to make,” Othman said. “This is why we are afraid of agreements and immunity. … If there are wanted people in any area, why not send an Iraqi force to do the job?” ‘

Ned Parker on how the troubling story of Awakening Council guerrilla Abu Abed indicates that little progress has been made toward Sunni-Shiite reconciliation in Iraq.