Helena Cobban, proprietor of the JustWorldNews web site, has been covering global issues as a professional journalist for 35 years, most recently for the Christian Science Monitor. She writes:

‘Five years into the still unfolding tragedy of the US invasion and occupation of Iraq, it is clearer than ever that this intervention has inflicted significant harm not only on Iraq’s 30 million citizens but also on the citizenry of the United States. Five years into this venture, its documented costs to Americans have already risen past 4,080 of our loved ones killed, scores of thousands maimed for life, the return of scores or hundreds of thousands of traumatized Americans to their home communities, hundreds of resulting suicides, and the tossing-away of $523 billion (and counting) of our children’s and grandchildren’s patrimony.

President George W. Bush financed his willfully misguided decision to invade and occupy Iraq in an unprecedented way. He notably did not ask Americans to tighten our belts or scrimp to buy war bonds. He sold T-bills to all comers. The amount of T-bills held by the governments of China and Japan now far out-tops the costs of the war. They constitute a sizable portion of the federal deficit and have changed the balance of world economic power in ways that no-one can yet completely predict. (I note that in 1956, when Eisenhower wanted to persuade the British government to end its unjustified occupation of Suez, he had only to start selling Washington’s holdings of the pound sterling and London jumped immediately into line. Sic Transit Gloria Imperii. Most likely neither Japan nor China is about to do that. But the world economic balance has still shifted massively against our country’s interests.)

Bush’s decision to invade Iraq and the way it was implemented reduced not just the economic power our country wields in today’s now globalized community; it also, by an even greater margin, slashed and burned our country’s reputational or “soft” power. Back in the mid-1990s, the United States towered above the rest of the world in all the major dimensions of national power. In 2008 it remains “Number One” only in terms of raw military power—and this at a time when, because of the hyperlinked nature of the global communications environment, military power on its own has become less capable than ever before of realizing, and holding on to, tangible strategic goals outside a nation’s own borders. Remember Israel in Lebanon, in 2006: stunning military superiority, but a total incapacity to translate that into any meaningful political/strategic gains.

Indeed, in today’s global environment, military power that is not backed by that key soft-power quality of “legitimacy” can usually be seen as actively counter-productive to the power that wields it, rather than productive of anything of lasting value in the world.

The invasion of Iraq has been harmful to the American people’s interests. But the imminent transition away from Bush provides an opportunity for Americans to discuss how to build of an entirely new kind of relationship with “the other six billion”—that is, those six billion of our fellow-humans who happen not to be U.S. citizens, and whose future is more deeply and inextricably intertwined with ours than ever before. It is important that this discussion be conducted in a way broadly accessible to the public, rather than in the sometimes arcane jargon of the policy wonks.

Among the pressing issues confronting us at this juncture are security affairs, the international economy, human rights, climate change, and the shifting global balance. The U.S. should pursue an approach to foreign affairs that I call “Global Inclusion”, rather than a quite counter-productive attempt to maintain near-unilateral global control. All Americans should feel motivated and empowered to increase their engagement in the national debate over foreign policy issues, a debate that for too long now—-okay, most especially since 9/11—has been dominated by a small coterie of jingoistic (and generally male) talking, or rather “screeching”, heads.

I have striven to contribute to that very discussion in my latest book: Re-engage! America and the World After Bush 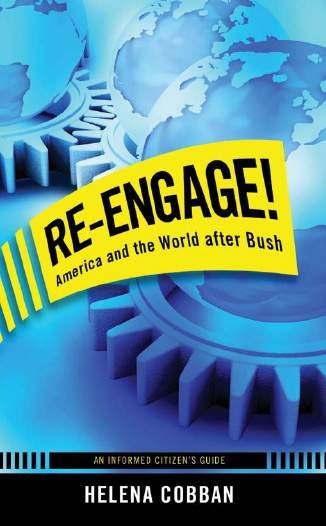