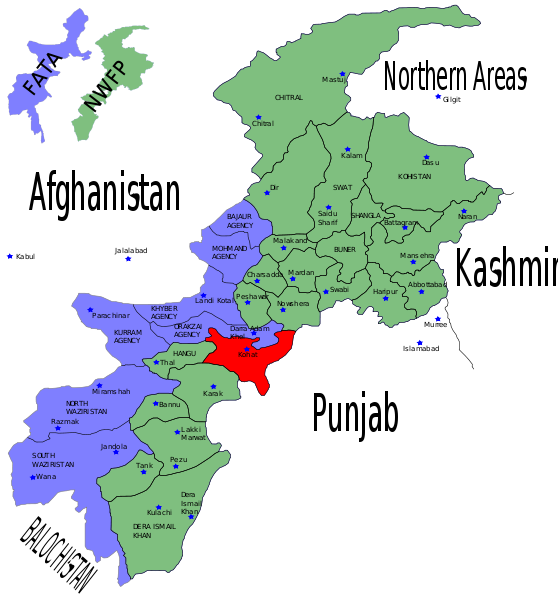 A suicide bomber used a huge truck bomb to blow up the market in the Shiite village of Ustarzai, Kohat District, killing 33 and wounding 80. Many shops, buildings and vehicles were destroyed in the blast. The village is largely inhabited by Bangash Pashtuns, who tend to follow the Shiite branch of Islam, unlike most other Pashtuns, who are Sunnis. The attack was probably, despite their denials, the work of the Tehrik-i Taliban Pakistan (TTP) or the Movement of Pakistani Taliban, now headed up by Hakimu’llah Mahsud from Orakzai Agency in the Federally Administered Tribal Areas (very vaguely like US Indian reservations, but for the Pashtun tribes up there). The attack follows on a bombing on Thursday that had left 6 dead.


Kohat is in red

On Saturday morning, tribal notables in the area held a peace jirga of congress that gathered Sunni and Shiite leaders together to defuse the tensions caused by the bombing.

The TTP is furious that the Pakistani military took them on and forced them out of the Swat valley. Although many Sunnis in Swat supported the operation, all Shiites did, and the Pakistani Taliban hate Shiite Islam anyway. The operation might have been revenge for the Pakistani army’s invasion of Swat, or it could just be a manifestation of the hyper-Sunni Taliban’s hatred of Shiites. The Bangash Shiites may be seen by the Taliban as a local intelligence asset for the government in its fight against Talibanism.

Pakistan’s Shiite population is probably about 13% of the country, and they have been brutally targeted by Sunni Muslim extremists in recent years. The Shiite Pakistanis, along with mystical Sufis and secularists, are die-hard opponents of al-Qaeda and the Taliban.