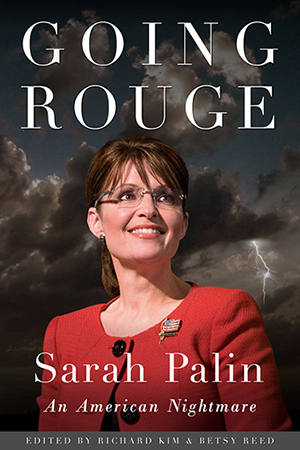 Since she’s back, so am I. Below is a reprint edition of my essay from September 2008 comparing Sarah Palin to Muslim fundamentalists on select issues.

Also check out Going Rouge: An American Nightmare from OR books, in which another of my Salon pieces on Palin is reprinted: Salon.com
Tuesday, Sep 9, 2008 03:12 PDT
What’s the difference between Palin and Muslim fundamentalists? Lipstick
A theocrat is a theocrat, whether Muslim or Christian.
By Juan Cole

John McCain announced that he was running for president to confront the “transcendent challenge” of the 21st century, “radical Islamic extremism,” contrasting it with “stability, tolerance and democracy.” But the values of his handpicked running mate, Sarah Palin, more resemble those of Muslim fundamentalists than they do those of the Founding Fathers. On censorship, the teaching of creationism in schools, reproductive rights, attributing government policy to God’s will and climate change, Palin agrees with Hamas and Saudi Arabia rather than supporting tolerance and democratic precepts. What is the difference between Palin and a Muslim fundamentalist? Lipstick.

McCain pledged to work for peace based on “the transformative ideals on which we were founded.” Tolerance and democracy require freedom of speech and the press, but while mayor of Wasilla, Alaska, Palin inquired of the local librarian how to go about banning books that some of her constituents thought contained inappropriate language. She tried to fire the librarian for defying her. Book banning is common to fundamentalisms around the world, and the mind-set Palin displayed did not differ from that of the Hamas minister of education in the Palestinian government who banned a book of Palestinian folk tales for its sexually explicit language. In contrast, Thomas Jefferson wrote, “Our liberty cannot be guarded but by the freedom of the press, nor that be limited without danger of losing it.”

Palin argued when running for governor that creationism should be taught in public schools, at taxpayers’ expense, alongside real science. Antipathy to Darwin for providing an alternative to the creation stories of the Bible and the Quran has also become a feature of Muslim fundamentalism. Saudi Arabia prohibits the study, even in universities, of evolution, Freud and Marx. Malaysia has banned a translation of “The Origin of the Species.” Likewise, fundamentalists in Turkey have pressured the government to teach creationism in the public schools. McCain has praised Turkey as an anchor of democracy in the region, but Turkey’s secular traditions are under severe pressure from fundamentalists in that country. McCain does them no favors by choosing a running mate who wishes to destroy the First Amendment’s establishment clause, which forbids the state to give official support to any particular theology. Turkish religious activists would thereby be enabled to cite an American precedent for their own quest to put religion back at the center of Ankara’s public and foreign policies. . ,