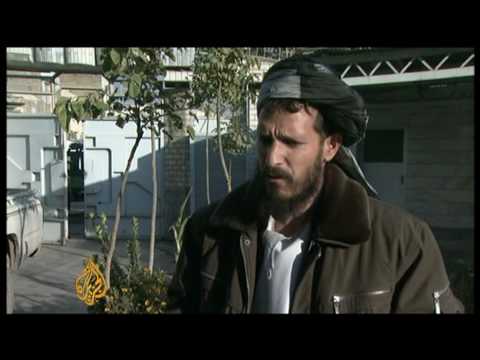 Proposed talks between the US and the Taliban, to be brokered by Saudi Arabia and Pakistan, have broken down because the Taliban are unwilling to talk to what they consider the foreign, illegitimate occupiers of their country. (See Mullah Omar’s statement in the next post).

On the other hand, some negotiations are doing well. Aljazeera English reports on 300 Taliban fighters who recently defected to President Hamid Karzai, now pledging themselves to fight the forces of Mullah Omar. The defection occurred in Herat, western Afghanistan, where the security situation has improved during the past year (unlike that in the southern Pashtun provinces).

The NYT reports that the northern province of Qunduz has reemerged as a Taliban center. It is the northern province with the biggest proportion of Pashtuns, about 1/3 of the population, so the Taliban have a recruitment pool there. And, since the US and NATO have shifted some supply lines to Tajikistan from Pakistan, it is important to the Taliban to cut off the Tajikistan route, and Qunduz is ideally suited to this purpose. I don’t agree that the resurgence there could have been prevented with some better police work. I think it is structural. If there were no supply lines to NATO from Tajikistan, I’m not sure the Taliban would have wasted resources to stage a comeback up there. They have been focused on cutting off the Khyber Pass route between Pakistan and Afghanistan.

There is another possible route, down from Lithuania to Uzbekistan through Russia, but the Russians are complaining that despite the agreement reached a year ago between Washington and Moscow allowing use of that route, the US and NATO have shipped nothing that way. Presumably the latter are afraid of becoming too beholden to Russia.

Pakistani Prime Minister Yusuf Raza Gilani has expressed concern that any US troop escalation in Afghanistan by the US might have the effect of pushing Taliban fighters from that country into Baluchistan, Pakistan’s already-troubled southwestern province, where the Baluch linguistic and ethnic group has had a strong sub-national movement, along with some separatists, for decades.

India and Russia want an Obama ‘surge’ in Afghanistan because they are afraid that if Muslim extremists take over the country, that development could threaten their own security. China is more or less bankrolling the Afghanistan War, and Beijing views the Taliban as close to Uighur Muslim separatists in its troubled northwestern Xianjian Province, so although they are not vocal about it, Chinese leaders are probably just as glad if the US ups its ante in Afghanistan, which has a short highland border with China.

In contrast, Pakistan does not seem eager for the further foreign troops, in part because it wants to project power and influence into Afghanistan itself. But Pakistan is not as influential as the new sub-superpower tier that some call BRIC (Brazil, Russia, India and China)– though in this case it is probably just RIC, since Brazil is not involved.

Signs of what Afghanistan may yet do to the Pentagon could be discerned in Germany on Thursday, as that country’s highest military official resigned over a mistaken bombing of fuel trucks in Qunduz Province, which allegedly killed over 100 civilian villagers. (The Taliban had hijacked two NATO fuel trucks coming in from Tajikistan, but the drivers got stuck in a river and had to abandon them. They invited local villagers to help themselves to the fuel. The German military, responsible for Qunduz, apparently saw a lot of people around the hijacked trucks in satellite photos, and thought they were Taliban fighters. German officials went on denying, some until this day, that any civilians were killed). There are calls for Chancellor Angela Merkel to fire from the cabinet Franz Joself Jung, who had been minister of defense when the Qunduz airstrike occurred, and who is accused of a kind of soft cover-up of the mistake, claiming to know less at the time about the events than subsequently leaked memos demonstrated was actually the case.

Word of the resignation reached Qunduz, where the elder from whose tribe most of the victims derived gave an interview in Pashto expressing satisfaction at the development. The USG Open Source Center translated it:

Konduz, 26 November: A tribal elder in northern Afghanistan calls the resignation of the German chief of army staff a positive move.

A tribal elder from the Omarkhel tribes, Asadollah Omarkhel, says the move in protest against civilian casualties is a positive act.

Asadollah Omarkhel is a tribal elder of the Omarkhel tribe in the Aliabad District (Konduz Province) in which more than a 100 members of his tribe were martyred on 3 September in a German-led air strike.
In an interview with Afghan Islamic Press (AIP) he said that they praise the decision. He added that many civilians are being killed in foreign troops’ air strikes.

“On September more 100 civilians, most of them from Omarkhel tribe, were killed by the air strikes in the Aliabad District,” he said.
Omarkhel added that they hoped other foreigners also felt such responsibility and condemn the killings of Afghan civilians and show to the world that they are against such acts.

Omarkhel said that they hoped that the Afghan and coalition forces should take major steps to save civilians lives and avoid killing and them calling them as suspected insurgents.

On 3rd and 4th of September of the current year the Taleban hijacked two NATO fuel tankers in the Aliabad District of Konduz Province. They called on the people to come and get fuel. After people largely gathered there, NATO planes bombed the oil tankers in which more than 100 people died. For this reason the German chief of staff announced his resignation today.

(Description of Source: Peshawar Afghan Islamic Press in Pashto — Peshawar-based agency, staffed by Afghans. The agency used to have good contacts with Taliban leadership; however, since the fall of the Taliban regime, it now describes itself as independent and self-financing). ‘