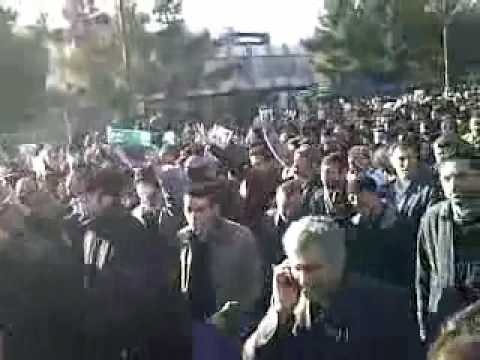 The mourning procession for Grand Ayatollah Hosain Ali Montazeri in the holy city of Qom south of Tehran turned into a huge Opposition rally, according to the Guardian, with protesters wearing green and chanting against Supreme Leader Ali Khamenei, with some calling him ‘murderer,’ going beyond the charge of ‘dictator’ that has become common. These were the largest demonstrations ever seen in the holy city. Qom is the home of influential grand ayatollahs and some 50,000 seminary students.

Here is a youtube video of the protests to give the flavor:

Plainsclothesmen on motorcycles are alleged to have attacked the automobile of opposition leader Mir Husain Mousavi as it was returning from the funeral. One of the persons in his entourage was lightly injured.

Among the things enraging the demonstrators was the following statement by Leader Khamenei on Montazeri’s death, in which he accused the grand ayatollah of having been tested by God and of failing the test, but in which Khamenei went on to pray for divine forgiveness for his departed foe. The language of failing the test refers in fundamentalist religion to the assertion of individual ego and refusal to fall quiet when one does not get one’s way. Khamenei is saying that Montazeri should have remained quiet about the 1988 massacres of dissidents, and that his standing up for human rights was a sign of human frailty and overpowering ego, which had the potential to undermine the Islamic Republic. Cult-like ideologies always attempt to silence dissidents and to paint dissidence as pure individual selfishness that leads to public turmoil.

‘ In the name of [G]od who is wise and merciful.

We are informed that the illustrious scholar Mr Hajj Sheykh Hoseyn-Ali Montazeri has bid Farewell to this mortal coil and has hastened to the afterlife. He was an eminent scholar and an illustrious thinker and many students benefited from him. Much of his life was spent in the service of Late Imam (Khomeyni); he engaged in many jihads and endured much scorn in these endeavors. Towards the end of the Imam’s life, (he failed) a difficult and momentous test. I beg almighty god envelope him his mercy and love and to absolve him by accepting the hardships (he) endured in this world as his penance. I his send condolences to his honorable wife and children and I pray for divine mercy and absolution for him.

(Description of Source: Tehran Fars News Agency in Persian — Privately owned online news agency which began operating in mid-November 2002. In December 2007, Hamid Reza Moqaddamfar replaced Mehdi Faza’eli as managing director and told Fars managers that the agency follows “Principle-ists” policies and its activities are in line with the Islamic Republic and the Vali-ye-Faqih; URL: http://www.farsnews.com/) ‘