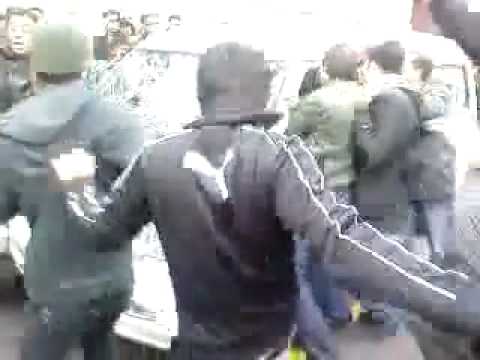 The BBC is reporting that clashes are continuing into Monday morning between protesters and the regime security forces in Tehran and perhaps other cities, marking the first decisive failure of the basij paramilitary to control the streets by early morning of the day of a big demonstration. The number of protesters allegedly killed by security men rose to 9, with dozens wounded and 300 persons allegedly arrested.

This video shows protesters freeing others taken prisoner in a basij van:

The chanting on Sunday turned against Ayatollah Ali Khamenei himself, not just against President Ahmadinejad. He was castigated as the Dictator and as worse than the old shah, and the very ideological basis of the regime, the doctrine of clerical rule, was chanted against in the streets. The legitimacy of the regime, profoundly shaken by the events since early June’s presidential election, is now being shredded further.

Another remarkable dimension of Sunday’s events was the sheer number of cities where significant rallies and clashes occurred. Some of those allegedly killed are said to have fallen in Tabriz, a northwestern metropolis near Turkey. Even conservative cities such as Isfahan and Mashhad joined in. Shiraz, Ardabil, the list goes on. The attempt of some analysts to paint the disturbances as a shi-shi North Tehran thing has clearly foundered.

The most ominous sign of all for the regime is the reports of security men refusing orders to fire into the crowd.

But for the movement to go further and become truly revolutionary, it would have to have a leader who wanted to overthrow the old regime and who could attract the loyalty of both the people and elements of the armed forces. So far this key revolutionary element, of dual sovereignty, has been lacking, insofar as opposition leaders Mir Hosain Mousavi and Mehdi Karroubi have tried to stay inside the Khomeinist framework while arguing that it is Khamenei who violated it by making it too authoritarian. Saying you want slightly less autocracy within a clerical theocracy is not a recipe for revolution.

Najmeh Bozorgmehr reports from Tehran for the FT that on Sunday in the capital, crowds– bigger than even some of those that assembled in June– maintained their discipline and proved unassailable by the basij motorcycle and other crowd control techniques. She quotes people in the crowd urging demonstrators to stick together for this purpose. She must be suggesting that the crowds were several hundred thousand strong in the capital.

Here is a typical Youtube video of Sunday’s demonstrations in Tehran:

Richard Spencer of the Independent reports from Dubai on the darker side of Sunday’s events, as crowds went on rampages, setting fire to banks, government buildings and even a local police station in response to the use of live ammunition on them by security forces. They threw up barricades and set fire to them, as well as to basiji motorcycles, filling the streets with shooting flames and hovering smoke.

The report of attacks on banks makes me think that there is an economic dimension to this uprising. President Mahmoud Ahmadinejad’s profligate spending had provoked very high inflation last year, up to nearly 30%. Although the government maintains that inflation is now running 15%, that is still a hit that average families are taking, on top of the high prices of last year. And, many economists suspect that the true rate is higher than the government admits. Inflation hurts people on fixed incomes or people who cannot easily raise the price for the services they offer. Since much of the economy is locked up in government-owned companies or semi-public ‘foundations’ (bonyads), some controlled by the Iranian Revolutionary Guards and others by elite pro-regime clerics, there may be a monopoly effect operating from the huge public sector that limits private merchants’ and entrepreneurs ability to raise prices. Being 15-20 percent poorer every year would make a person angry.

Moreover, as as Robert Worth recently reported, the government has been threatening to remove subsidies from staples. I was in Egypt in January of 1977 when President Anwar El Sadat stopped subsidies under pressure from the IMF, and it threw the country into 3 days of turmoil from Aswan to Alexandria. Iranians have been upset by this talk of no more subsidies and it may have fed economic anxieties already inflamed by the high inflation (in fact, removal of subsidies is essentially a form of price inflation for consumers).

But values come into it, too. Farnaz Fassihi of the WSJ points out that the first month of the Muslim lunar calendar, Muharram, has been considered a month for truces and non-violence. The very name of the month means ‘sanctified.’ Even the brutal troops of Mohammad Reza Pahlavi, the shah or king overthrown in 1979, had not fired on crowds during Muharram. Opposition leader Mehdi Karroubi openly said that even the shah’s regime had not behaved on Muharram as clerical Leader Ali Khamenei’s had. Hint: in revolutionary Iran, that is a slam.

The regime therefore violated crowd norms, helping account for the vehemence of the pushback.

In Isfahan, security forces are said to have badly beaten and cursed the brother of Abdollah Nouri, the minister of state under the reformist government of former president Mohammad Khatami.

The killing of Ali Mousavi, the 34-year-old nephew of former presidential candidate Mir Husain Mousavi, was also a violation of Shiite values. The Mousavis are putative descendants of the Prophet Muhammad, a sort of caste in Muslim societies called ‘sayyid’ or ‘sharif.’

In fact, in the Constitutional Revolution of 1905-1911, one of the complaints of the crowd was that the Qajar monarchy had had sayyids beaten. So if beating a scion of the House of the Prophet can help spark a revolution, what about shooting one? And, oppositional film maker Mohsen Makhmalbaf maintains that Mousavi was killed by a death squad that came for him in a van rather than just falling victim to random police fire.

Killing a sayyid is a blot on any Iranian government. Doing so on Ashura, the day of morning for the martyred grandson of the Prophet, Imam Husayn, borders on insanity.