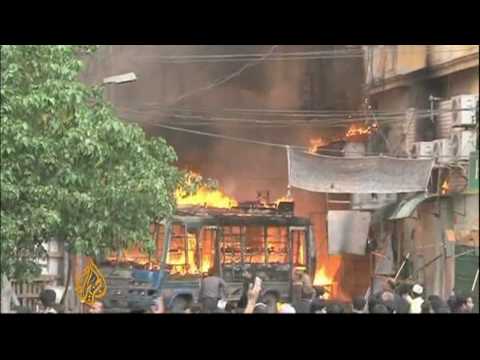 The bombing of a Shiite Ashura procession in Karachi, Pakistan, on Monday, which killed 40 and wounded 60– as horrific as it was– was only the beginning of the paralysis of this major port city and financial center larger than New York. In response to the bombing or encouraged by it, arsonists set fire to major markets.

“shops in the Lighthouse Market, Boulton Market, Paper Market and the adjoining areas were robbed and torched by miscreants. The police and eyewitnesses said a massive explosion rocked Lighthouse Chowrangi around 4.13pm. . . Within five to 10 minutes of the blast, nearby wholesale were attacked by unidentified people. The police said that more than 500 shops were robbed and torched in the Lighthouse Market alone. Within the span of an hour, public and private property at the Kharadar and Mithadar traffic sections, Boulton Market, Feroze Market, Akber Market, Paper Market, and warehouses in the plastic market and at 27 other places were robbed and set ablaze. Madina Ice Cream, Denso Hall, and the Kachi Gali Medicine Market were not spared either, nor was any mercy shown towards more than 30 other shops selling electronic items.

When police and firemen came, they came under fire from the arsonists.

Some groups are calling for a general solidarity protest on Friday against the Sunni-Shiite violence, including Sunni clerics horrified at the anti-Shiite bombing.

Interior Minister Rehman Malik correctly pointed out that an attempt to paralyze Karachi is an attempt to paralyze Pakistani commerce and finance. Unfortunately, as usual he hinted around that India was the hidden hand behind these events. Much more likely, they are internal Pakistani sectarian conflicts for which the Pakistani military, which has sometimes promoted hard line militant Sunni groups, ultimately bears some responsibility.

These Karachi events show how complex the politics of Pakistan are. The Sunni-Shiite violence there is much more consequential than the Taliban issue in the northwest on which US attention is concentrated. And while it has been suggested that transplanted Pashtun Taliban in Karachi were behind the bombing, that theory has not been proved. (There were Sunni-Shiite problems in Karachi going back to the 1980s long before there were any Pakistani Taliban).

What is encouraging is the level of solidarity among mainstream Sunni and Shiite organizations in Karachi, and the plans for a unity demonstration on Friday, both of which are on a scale far beyond what was seen in Iraq.