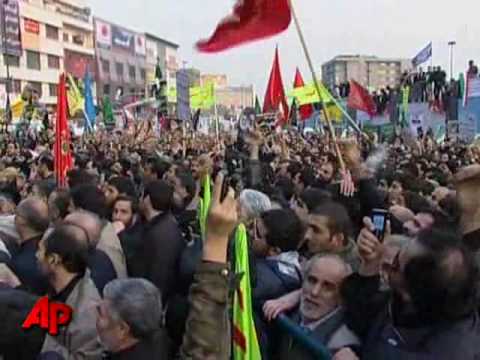 Today’s dramatic events in Iran reminded me a little bit of the dueling demonstrations mounted by the Lebanese in spring of 2005, when pro-Syrian forces brought out nearly 1,000,000 protesters, only to be answered by crowds nearly as large mobilized by Hizbullah. In Iran on Wednesday, the regime bussed in tens of thousands of supporters, with banners and placards, who chanted in favor of the hard-liners. Traditional preachers assured the faithful that the holy day of Ashura belonged solely to the religious the observant, a way of slamming the political opposition as atheists in mullahs’ clothing.

AP has video, and mentions pro-government rallies in Shiraz, Arak and other provincial cities, as well.

Some of the demonstrators wore white burial shrouds to announce their willingness to die for supreme leader Khamenei. Others chanted slogans denouncing the dissidents as apostates, that is as persons who had abandoned Islam and therefore deserved the death penalty. Some said, “Death to Mousavi, Death to Karroubi,” the opposition leaders. A leading cleric from the eastern city of Mashhad, Sayyed Ahmad Alam ol-Hoda warned that the political opposition had veered into becoming enemies of or warriors against the Islamic state and therefore of God, and thereby warranted trial and execution. He threatened them with chastisement not only at the hands of the state security forces but also those of the people– that is, he menaced the green movement with vigilante, KKK-type popular attacks. The Green Movement characterized his speech as an attempt to radicalize the country.

The regime therefore not only engaged in counter mobilization, but it also took steps to completely deny legitimacy to the dissidents, with hard-liners threatening to turn the leaders of the green movement into fugitives and common criminals. FT reports that a Revolutionary Guards site said Mousavi was under house arrest. Indeed, rumors were spread around that former presidential candidates Mir Hosain Mousavi and Mehdi Karroubi had fled Tehran to points north. This attempt to demoralize the opposition by suggesting that their leaders had abandoned them largely failed, since dissident websites were quick to deny the rumors. They took revenge for the calumny by alleging that supreme leader Khamenei was keeping his private jet ready to fly him to Russia.

The opposition also alleged that another prisoner-mistreatment scandal was brewing, with 500 prisoners arrested during Sunday’s protests being mistreated at a facility at Eshratabad.

It was a day then of a massive counter rally and of dueling propaganda jabs. Despite the pro-regime masses in the streets of the capital, the increasingly ominous threats of no more Mr. nice guy from the Tehran police chief, and the intimation by hard-line clerics that they would not scruple to return to the days of terror that marked the 1980s, it seems hard to believe that even regime stalwarts imagine that such measures will be sufficient to silence the opposition or to end the crisis that roils Iran with seeming greater ferocity every day