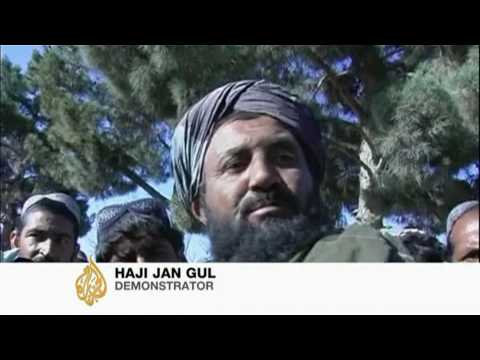 Oh, no. Here we go again. Some 2000 villagers from near Lashkar Gah in Helmand province mounted a demonstration against the alleged desecration of the holy Qur’an by NATO troops.

The rally turned violent, and Afghan and foreign troops opened fire, allegedly killing at least 6 persons. (NATO denied the deaths, saying only a sniper was killed). Helmand is a hotbed of Taliban activity and its Pashtun population is relatively anti-Western.

Similar controversies over Qur’an desecration provoked anti-American rallies by the Muqtada al-Sadr group in Iraq some years ago. This cycle, of charges of foreign blasphemy, big rallies to protest it, and then the shooting of protesters, is a deliberate ploy by the Taliban to turn locals against NATO and the Afghan army.

Two US troops and 4 Afghan soldiers were killed by bombs in eastern Afghanistan on Tuesday, and nine Afghan troops were wounded. That region of the country is a stronghold of movements such as the Islamic Party or Hizb-i Islami of Gulbadin Hikmatyar and the Haqqani Network of Siraj Haqqani, both mounting insurgencies against the US- and NATO-backed government of Hamid Karzai.

The Obama administration is dedicating $400 million to improving Afghan agriculture this year in a key change from the old Rumsfeld years when the country’s needs were neglected. Training Afghan farmers to produce valuable crops other than poppies is key to reducing narco-terrorism and strengthening the Kabul government (at least those parts of the Kabul government that are not themselves dirty with drug money).

The UN maintains that the general perception in Afghanistan that US aerial bombardment is responsible for most civilian deaths is incorrect. In fact, of the over 2400 civilians killed in 2009, two thirds were killed by Taliban or other radical fundamentalists.

What is important is that the Pashtun plurality in the country comes to know and believe that statistic. It can’t be taken for granted, and may be obscured by pious fury over alleged Qur’an desecration. I can’t tell you how dangerous the spread of such a belief among Pashtuns would be to US and NATO success.