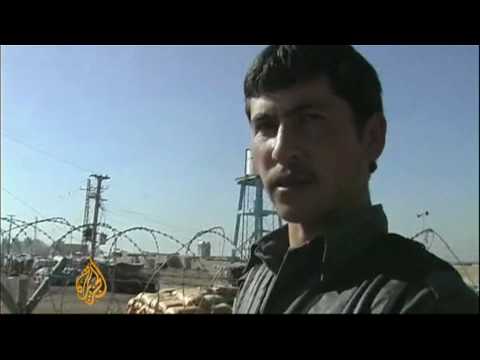 NATO troops appear to have made a horrible error in Afghanistan on Friday, as they clashed with what turned out to be Afghan National Army troops and called in an air strike on them, killing 4 and wounding 6. The governor of Wardak province where the fight took place said he was at a loss to explain it.

The incident comes on top of Thursday’s slaying by NATO of an Afghan religious leader, again apparently by accident.

Aljazeera Arabic is reporting that Duran Safi, an insurgent leader of the Hizb-i Islami in eastern Afghanistan, has rejected talks with the Karzai government.

The Saudi government declined President Hamid Karzai’s call for Riyadh to broker a deal with the Taliban, saying that first the latter must cut off their relationship with Usamah Bin Laden and cease giving him safe harbor.

Ironically, at the same time India is softening on the idea of talks with the Taliban, which New Delhi initially opposed out of fear they would rehabilitate allies of Pakistan.

Meanwhile, Sonia Verma explores the issue of how likely the insurgents in Pakistan are to open talks with the Kabul government. The most promising negotiations might be with Gulbadin Hikmatyar, the leader of Hizb-i Islami or the ‘Islamic Party’ in eastern Afghanistan. It is unlikely that Mullah Omar, leader of the Old Taliban in Quetta, will take part in talks, and even if he did, she says, he does not seem in firm operational control of the Taliban commanders, some of whom openly say they will defy him if he makes the wrong decision. Siraj Haqqani, leader of the Haqqani network in North Waziristan and south Afghanistan, will also likely not talk.

‘According to an unclassified report by Task Force Kandahar, only 30 per cent of insurgents fight for money. The rest take up arms because of tribal allegiances or for “other reasons,” an amorphous category that encompasses everything from revenge to land disputes. Just 10 per cent fight for religious reasons, according the analysis.’

Aljazeera English reports on the Taliban attack at Lashkar Gah late on Friday after the London conference ended.

Ajazeera English interviews a female member of parliament on the issues broachd at the London conference.