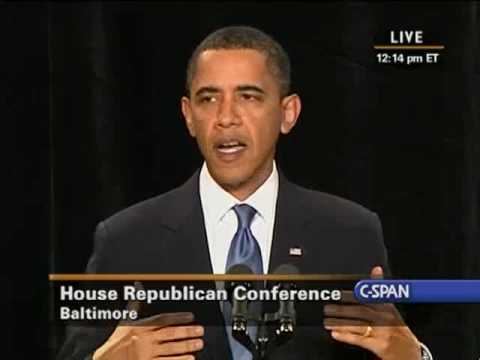 President Barack Obama was so effective in his 90-minute ‘questions session’ with the congressional Republican conference that some Republican leaders are said to be regretting that they allowed the session to be recorded. Fox Cable News rectified the error by pulling away its own cameras. Luckily, C-Span was there.

Obama complained about hyperbole on the Republican Right, such that the health bill, which is similar to Republican proposals of the early 1990s when Clinton was trying to overhaul health reform, is depicted as a Bolshevik plot to impose big government.

Here is the C-Span video:

My own view is that pundits and politicians are writing off Obama prematurely. He is likeable, which counts for a lot in politics. People forget now that Reagan had a deep recession, was forced out of Lebanon, and was ridiculed for saying that trees cause pollution, but he trounced Mondale. Clinton failed to pass health care reform, but he trounced the dour Dole. Inside the beltway policy wonks don’t include the likeability index in their prognostications, but it was on full display in the president’s back-and-forth with Republicans at Baltimore on Friday.

And, it is entirely possible that the rest of his term will see substantial job creation, which is what will really matter to voters. As it is, the economy grew by nearly 6% in the fourth quarter of 2009, and if that sort of growth continues, lots of people will be back to work.