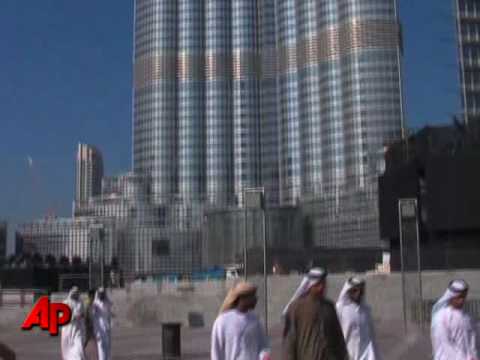 The world’s tallest building, Burj Khalifah or Khalifah Tower, was unveiled in Dubai on Monday.

Dubai is a finance hub, the bubble of which has burst, so the building’s opening now seems a critique of past excesses more than the triumph originally dreamed of. Now that Dubai is having to be bailed out by its oil-rich sister emirate, Abu Dhabi, the tower had to be named for its ruler Sheikh Khalifa bin Zayed Al Nahyan, rather than retaining its original name, Burj Dubai. Many critics have seen it as a monument to hubris likely to remain mostly empty, as the 21st century Tower of Babel.

As you can see, Dubai nevertheless went all out to celebrate the opening.

The Burj Khalifah is a symbol of everything wrong with our present moment. Rooted in a finance and real estate bubble, planned as big for the sake of bigness, opulent, now saved from disaster by Abu Dhabi’s unsustainable oil revenues, it casts its shadow on a nation of guest workers, many impoverished and exploited. If global warming proceeds at the pace some climate scientists fear, and the seas rise substantially, it may, ironically enough, be all that is visible of the low-lying United Arab Emirates a century from now.