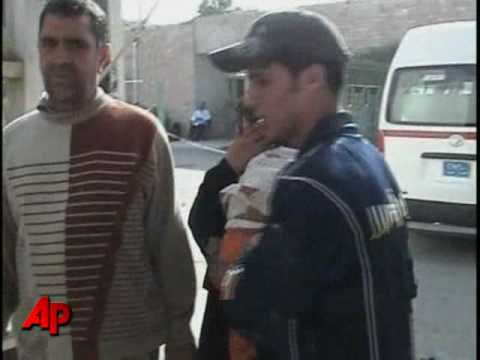 AFP Arabic reports that a female suicide bomber detonated her payload in a tent in northeast Baghdad (Bub al-Sham) among pilgrims walking to the Shiite holy city of Karbala, killing 56 and wounding 144 according to late reports. The pilgrimage commemorates the 40th day after the anniversary of the martyrdom of Imam Husayn, the grandson of the Prophet Muhammad, at the hands of the Umayyad Empire in 680 CE. Thousands of Iraqi Shiites are walking or driving toward Karbala, creating a security nightmare for Iraqi army and police intent on preventing Sunni Arab terrorist attacks on the pilgrims.

Along the way philanthropic groups have set up tents with food and drink. Since Husayn was said to have suffered from thirst as he and his family and friends were besieged by the armies of the Caliph Yazid, it is common for pious Shiites to put out water stalls. The suicide bomber is said to have entered such a tent for women pilgrims, which had Interior Ministry female security personnel within, patting people down. The attacker set off her bomb before she could be inspected, killing 3 inspectors along with many others in the tent.

Some 35,000 pilgrims have already reached Karbala in preparation for the 40-day mourning sessions there, about five days from now.

Aswat al-Iraq reports via PNA that the Iraq ministries of the interior, defense and health said Sunday that 196 non-insurgent Iraqis were killed in political violence in January, 135 of them civilians and the others police or soldiers. In addition, Iraqi security forces killed 54 armed militants and arrested 681 others. The total of wounded this January was 782, 620 of them civilians.

The US military suffered 5 deaths in Iraq in January, but only 2 were the result of hostile action. In December, no US troops died in Iraq.

Sunni-Shiite violence has continued as part of the low-intensity conflict in post-Baath (and increasingly post-American) Iraq. Already raw nerves have been rubbed even more raw by the exclusion of over 500 candidates out of some 3000 from running for parliament. Those excluded include some candidates who presented forged credentials to he High Electoral Commission. But many were disqualified by the Accountability and Justice Committee on grounds of close connection to the banned Baath Party. Since the more prominent politicians so excluded were Sunni Arabs of a secular cast of mind, Sunni Arabs are particularly upset.

Salih Mutlak, the leader of the National Dialogue Bloc in parliament (11 seats), was among those excluded, and his appeal to the courts has failed. Sunni Awakening leader Ahmad Abu Risha, whose group went on the US payroll to fight Sunni radicals (“al-Qaeda”), is considering boycotting the March 7 parliamentary elections over the exclusions.

Tensions over the election are running so high that US ambassador to Iraq Christopher Hill has publicly weighed in, warning about the danger to the credibility of the elections of excluding high-profile Sunni Arabs.

One menace is that Sunni boycotts or noncooperation could complicate the process of forming a new government after the early March elections.

Tensions also remain high between Arabs and Kurds in the north, where the US is jointly patrolling with Iraqi and Kurdish paramilitary forces.