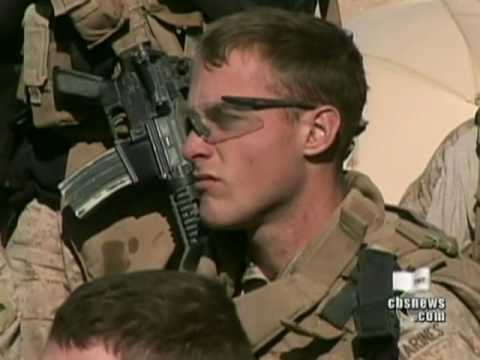 AFP reports that the joint NATO/ Afghanistan National Army assault force of 15,000 on Friday moved toward the Helmand city of Marjah, at the center of the poppy growing heartland of Helmand Province. The city of some 80,000 has been surrounded for weeks. On Friday the road east to the capital, Lashkar Gah, was crowded with Afghans fleeing Marjah, where some had been kept against their will by the Taliban or were too poor to be able to afford to leave.

The military forces are spearheaded by the US Marines and Afghanistan National Army troops, in the first major test of the latter, and a British contingent of over 1,000 is being sent in. Radio Azadi reports in Dari Persian that the helicopter gunships were sent in first.

Pajwhok news agency reports that there were ‘shaping’ attacks on Friday: “In one clash, Marines fought off an ambush against one of their convoys with 50-caliber machine guns and grenade launchers. Reporters with the U.S. 5th Stryker Brigade heard a large explosion, which troops said was from a missile attack against a Taliban compound.” These actions appeared to have produced no casualties on Friday, though on Thursday the Taliban had killed a British soldier with a roadside bomb.

(Hundreds of miles to the east of Marjah, a suicide bomber wearing an Afghan police uniform wounded 5 US troops when he detonated his payload on Friday.)

But it may be that no Taliban stood and fought as the invasion took place. The USG Open Source center translated an item from the Afghan Islamic Press in Pasho early on Saturday, February 13, 2010 that reported,

‘ Foreign forces have reportedly captured Marja. Mohammad Salem Wardag, a former member of the Helmand provincial council, told Afghan Islamic Press (AIP) this morning, 13 February, that last night the foreign and domestic forces captured the Marja area (district). Wardag added: “The local residents told me over the satellite phone that when we woke up this morning, we saw Americans walking in Marja, and they have captured the area.” Wardag said no clashes had taken place in Marja and that the foreigners had captured the whole area. ‘

The Afghan government says it has 1900 police ready to go into Marjah and establish long-term order. But if these police prove corrupt, oppressive, or lazy (and many Afghan police are on the take and are regular drug users), then the area could easily fall back under Taliban rule.

CBS News has video on preparations for the assault:

AP emphasized the way in which the assembled NATO and ANA forces had surrounded Marjah: