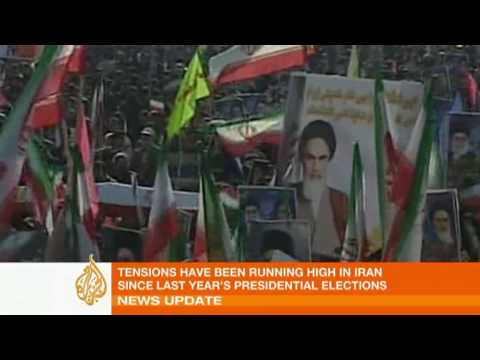 The regime seems to have successfully repressed any significant demonstrations by the opposition on Thursday.

One of the problems for the opposition is that it has essentially been mounting ‘flashmobs’— fairly spontaneous demonstrations organized by email and Facebook. The regime closed down most electronic communication earlier this week, foiling the tactic.

It may also be that Ahmadinejad’s ploy of foregrounding the Iranian nuclear enrichment program and the denunciations that drew from the Western powers has gotten the Iranian public’s back up and made them more nationalistic, so that they are swinging behind the regime against what they see as imperial oppressors.

This ways of thinking is visible in comments of former president Akbar Hashemi-Rafsanjani in this Aljazeera English report:

There are reports of attacks on and intimidation of the leaders of the opposition.