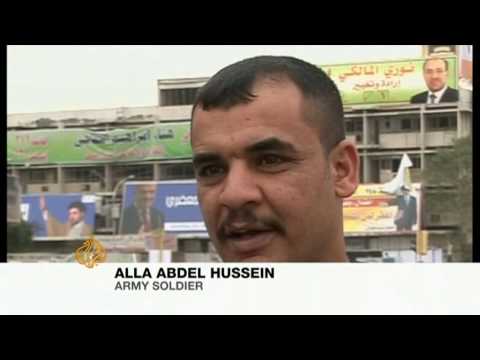 On Wednesday morning, three suicide bombers attacked the HQ of the provincial government, a police station, and a hospital in Baquba, the capital of Diyala Province east of Baghdad, killing at least 16 persons and wounding over 40. (The report of the explosion at the government building comes via Aljazeera Arabic.) The attack was probably undertaken by militant Sunni Arabs intent on creating an atmosphere of fear intended to keep voters home on the coming Sunday.

Diyala is a mixed province with a slight Sunni Arab majority. The Shiite minority, however, dominated its politics from 2003-2008, possibly with help from neighboring Iran. In response, Sunni Arabs launched a determined insurgency, making Diyala one of the more dangerous provinces in the country.

In January 2009, a Sunni Arab-dominated provincial council came to power. In the aftermath, however, arrest warrants were issued by the Shiite-dominated government in Baghdad for several provincial council members, who were suspected of links to insurgent guerrilla groups, and who had to go into hiding. The police and military in Baquba are disproportionately Shiite, which is one of the reasons the Sunni Arab guerrillas would have attacked them.

On February 26, a forum participant had posted a statement attributed to an Abu Bakr al-Baghdadi of the radical Sunni Arab ‘Islamic State of Iraq,’ which ridiculed Iraq’s elections. Translated by the USG Open Source Center, it said,

“The Initial Results of Elections According to Jihadist Sources

“The Ministry of War of the Islamic State of Iraq has won first place in the jihadist elections in the Land of the Two Rivers, and destroyed most of the election posts.

” The Electoral Program of the Al-Qa’ida Organization

“1- Purifying and liberating the land of the caliphate (governing system) from the Crusaders and applying God’s Shari’ah [religious law] in the Land of the Two Rivers.

“2- Establishing an Islamic state and getting rid of the legislators and legislative councils based on infidel democracy.

“3- Expanding the field of jihadist work to liberate Muslim countries from occupation, especially the Al-Aqsa Mosque[in Israeli-ruled Jerusalem], the cradle of prophets and messengers, and purifying it of the cowardly Zionists, following in the steps of Salah al-Din [Saladin].

“4- Applying God’s Shari’ah on Earth, establishing an Islamic caliphate, and unifying the Muslim point of view under the banner of monotheism and jihad.’

Opinion polling shows that only a tiny minority of Iraqi Sunni Arabs find these ideas attractive, and support for them has fallen dramatically in recent years.

As though a resurgence of Sunni Arab radicalism were not enough, the Associated Press has gotten hold of a warrant issued by Iraq’s Supreme Court for the arrest of Shiite clerical leader Muqtada al-Sadr, dated February 7 of this year. The surprise renewal of the warrant, originally issued under the American administration of Paul Bremer in 2004, threatens to roil Iraq. Sadr stands accused of ordering the killing of Majid al-Khoei on April 10, 2003, on the latter’s return to the holy city of Najaf from exile in London. Al-Khoei was killed by enraged mobs of nativist Sadr followers in part because his return seemed to have been sponsored by London and Washington, D.C. That the death was an assassination ordered by al-Sadr as opposed to the spiralling out of control of an urban mob has not been proven.

The American-inspired arrest warrant was allowed to lapse as part of the Bush administration’s truce with the Shiite leader. His Sadr Movement came to be a significant player in parliament, with over 10% of the seats, and his Mahdi Army militia was at one point in control of significant swathes of southern Iraqi cities as well as the capital. The Sadr Movement is part of the National Iraqi Alliance, which groups several important Shiite religious parties, and which seems set to gain between a sixth and a fifth of seats in the parliamentary elections scheduled for the coming Sunday.

The al-Maliki government denied that it had engineered the reemergence of the arrest warrant, and indeed denied that the warrant existed.

There is now certainly a suspicious pattern whereby the major challengers to al-Maliki’s State of Law coalition have run into sudden and unexpected legal problems in the run-up to the election. Salih Mutlak, a Sunni Arab ally of Iyad Allawi’s National Iraqi List, was disqualified from running on grounds that he was too close to the banned Baath Party that had been led by Saddam Hussein. The move potentially weakened the Iraqiya List.

Now the National Iraqi Alliance is being targeted for demoralization, with one of its chief leaders indicted anew on a 6-year-old charge that had seemed to lapse. Ironically, the Sadr Movement’s support had catapulted PM al-Maliki into power in spring of 2006, before the two broke with one another in summer 2007 over al-Maliki’s unwillingness to set a timetable for US withdrawal and to cease teleconferencing with President George W. Bush.

The greatest danger of these political maneuverings is that they may reignite guerrilla and militia violence in Iraq, and possibly impede the scheduled withdrawal of the US military. Both Sunni Arab guerrillas and Mahdi Army militiamen have been major sources of instability in Iraq at some points in the past six years. Some Sunni Arabs are worried about a resurgence of sectarian violence.

On the other hand, experienced Iraq hand Nir Rosen believes that all the talk about the reemergence of sectarian conflict is completely overblown. One reason Rosen may be right is that the Sunni Arabs decisively lost the civil war and were largely ethnically cleansed from Baghdad, so it is not clear that they have the social base to put up a further fight.

Aljazeera English reports on the campaign techniques being used in Iraq: