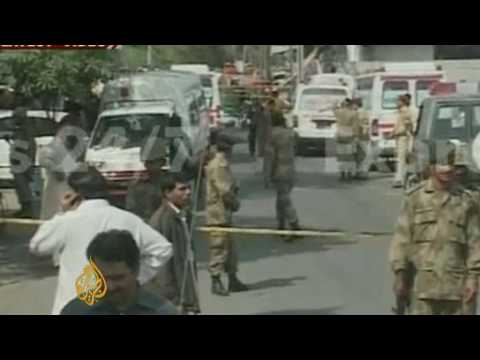 The run-up to the Ides of March in Pakistan has been characterized by numerous horrific bombings, credit for which has been claimed by the Tehrik-i Taliban Pakistan (TTP) or Taliban Movement of Pakistan. After a string of bombings in Lahore on Friday, on Saturday morning, a suicide bomber detonated his payload at a checkpoint station outside the city of Mingora in Swat, killing 10 persons, including two members of the security forces. Last summer, the Pakistani military expelled the Pakistani Taliban from Swat, before moving on to attack their bases and safe houses (or safe caves) in South Waziristan.

On Friday, bombing attacks on a military cantonment and on Iqbal Town and Samnabad in Lahore left 50-60 persons dead and 120 wounded. Some of the attacks targeted the Pakistani military, but the deadly bombing of a market inflicted severe damage on innocent civilians.

The Pakistani Taliban mostly hail from the Pashtun ethnic group in Pakistan’s northwest, though they do have some tiny fringe Punjabi associates, such as the Lashkar-i Tayyiba. Their attempt to impress on the Pakistani military and public that they are still capable of fighting back through such bombings of soft targets will likely backfire in a major way. As long as the TTP was primarily attacking NATO and US troops or the Afghan National Army across the border in Afghanistan, the Pakistani military and public could largely ignore them, or even configure them as a generally anti-imperialist force that admittedly was a little extreme.

But if they are going to blow up Lahore, the capital of Punjab Province, the TTP is going to have to be finished off. Punjabis are 55 percent of Pakistan, and the wealthiest and most powerful part. They are 80% of the army. Now, editorials are widely and bitterly complaining that the government has not dismantled the ‘infrastructure of hate.’ Some Karachi observers are calling on Punjabis to wake up to the threat. The subtext here is that Punjabi officers and politicians in the 1980s and 1990s fostered the Mujahidin and then the Taliban and small terrorist groups in hopes of using them to push the Soviets out of Afghanistan and the Indians out of Kashmir. But relationships change, and Punjabis are in fact likely to wake up.

I would make an analogy to al-Qaeda in the Arabian Peninsula, which launched a massive bombing campaign inside Saudi Arabia 2003-2006, causing the Saudi security and intelligence forces to take them seriously as an internal threat and to institute a thoroughgoing crackdown on them that largely succeeded inside the kingdom. Before it was Riyadh and Jidda that were being bombed, the Saudis seemed to see radical terrorism as someone else’s problem, however regrettable. After that the kingdom suddenly became much more integrated into the war on terrorism.

In the same way, this week’s bombings in Pakistan are likely to stiffen the resolve of the Pakistani elite to wipe out the TTP and the Afghan Old Taliban of Mulla Omar. It has already captured about half of the Quetta Shura or the Old Taliban shadow government based formerly in Quetta but increasingly now in Karachi (where they appear lately to have been assassinating rival Sunni clerics)

Guerrilla movements win by winning hearts and minds over time and successfully positioning themselves as the true champions of national or communal interests. The Pakistani Taliban are just flailing around making themselves more and more hated, and that by the most powerful ethnic group in the country.

If I am right, the Obama administration is continuing to benefit in its own attack on the Taliban and al-Qaeda from the stupidity of the latter two, insofar as they are alienating the Pakistani public, which had earlier been somewhat sympathetic to them.