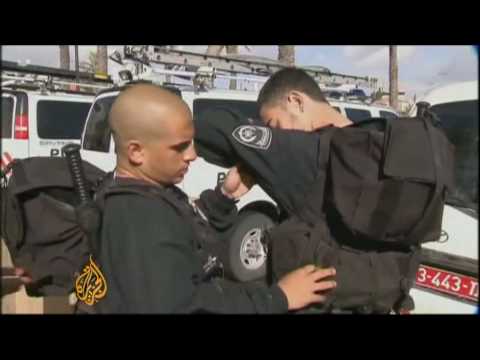 The visit to Gaza of Lady Ashton, the head of foreign policy in the European Union, was marred Thursday when a small fringe militant group calling itself Jund Ansar al-Sunnah fired a homemade rocket at a nearby Israeli farm collective, killing a Thai immigrant farm laborer.

Aljazeera English reports on the rocket attack, the first to produce a fatality in over a year.

Lady Ashton said she was “extremely shocked” by the loss of life. But she said the right thing to do now is to quickly restart peace negotiations.

Israel has the civilian population of Gaza under a blockade, and has increasingly refused admission to foreign dignitaries and human rights workers.

Ashton herself had had to lobby vigorously and for some time to be allowed to enter Gaza. Relations between Israel and and Europe have been strained, inasmuch as the European parliament has pressured Israel to cease its blockade of Gaza, which harms civilians and constitutes a form of collective punishment– illegal in the international law of occupations. The European parliament has also backed the Goldstone Report on Israeli atrocities and crimes during the Gaza War, and has urged EU member states actively to monitor Israel’s treatment of the Palestinians. (This European assertiveness is new, since Europe had in the past deferred to the US and Israel on Mideast Policy. The Gaza War provoked public anger throughout Europe for its obvious use of disproportionate force and targeting of civilian infrastructure, as well as wilful disregard of civilian life).

FT says that since the end of the Gaza War, in which the Israeli military destroyed thousands of buildings, most of them civilian in character, left 1 in 8 families homeless, and killed 1400 Palestinians (14 Israeli troops were killed), there have been few such rocket attacks. Israel holds Hamas responsible for any that are launched, even if it is not responsible for them.

In response, on Friday morning Israeli fighter-jets bombed four targets in Gaza, including a tunnel and a metal foundry.

The violence comes in the wake of a diplomatic crisis between the US and Israel over the colonization of Palestinian territory annexed to East Jerusalem, which is analyzed by U of Chicago political scientist John Mearsheimer in the London Review of Books.

The Thai farmworker’s death is, as Lady Ashton said, shocking and most lamentable. That it was a Thai who was killed, however, puts the spotlight on the plight of guest workers in Israel, many of whom are fighting deportation because Israeli policy is to offer permanent residency only to Jews.

Israel’s population is about 7.5 million, with 5.6 million Jews. But there are some 800,000 Israelis residing outside Israel if one counts the second generation, and it is not clear whether they are counted in the census. Israel has a million and a half Arabs, and some 300,000 other non-Jewish citizens (many of them Russians).

The irony of Israel importing Thai and Filipino labor on a rotating basis while imposing a 45% unemployment rate on Gaza, is hard to miss.