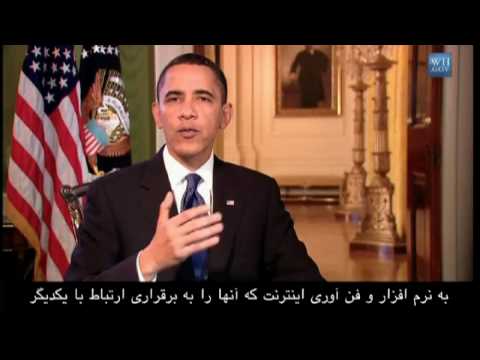 Today Iranians mark Now Ruz, their ancient New Year’s day, celebrated on the vernal equinox (which most often falls on March 21 but sometimes, as today, on the 20th). Now Ruz literally means “New Day.” Persian is an Indo-European language ultimately related to English, and “now” (pronounced “no”) and “new” are cognates.

As he did last year, President Barack Obama addressed Iran in a Now Ruz message. He renewed his offer of comprehensive diplomatic contacts with Tehran, decrying what he called the Iranian government’s determination to isolate itself.

ITN has the video of the speech:

Obama pledged to allow more Iranian students to study in the United States, and noted the recent decision to lift obstacles to US internet firms supplying the Iranian market, including Facebook.

Obama’s Iran outreach was stymied by the outbreak of massive protests in Iran after last June’s presidential elections, which the opposition maintains were stolen by Mahmoud Ahmadinejad. It also ran into difficulties when the apparent deal struck at Geneva on October 1, and tentatively agreed to by the representative of Supreme Leader Ali Khamenei, was rejected on his return to Iran by hardliners, presumably in the Revolutionary Guards.

Obama’s dogged determination to engage Iran and his decisions on exchange students and internet openness are far more likely to bear fruit than his predecessor’s dismissive and belligerent policies. The resistance of the White House to a campaign by the Israel lobbies for crippling sanctions and even military action against Iran is one element in the tense relations between Obama and Israeli Prime Minister Binyamin Netanyahu.

Iranian opposition leader Mir Hosain Mousavi praised the Green protest movement in the past year and pledged to continue to work for a more open press and the right to assemble and protest (pro forma already in the Iranian constitution).

Human rights and internet activists called upon the regime to release Iran’s “blogfather,” Hosain Derakhshan, from prison. Derakhshan, then living in Canada, pioneered techniques for blogging in Persian and sparked a communications revolution in Iran.