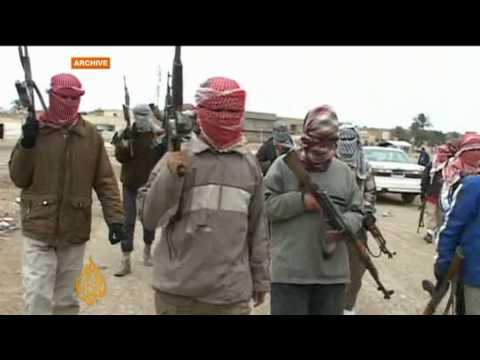 The headlines out of Iraq Sunday are mainly owing to the consequences of the US troop withdrawal from that country.

Update Three suicide bombs rocked the capital Sunday morning, in different districts, but each appearing to target foreign embassies, killing dozens. The Iranian and German embassies were among the targets. The Times of London correspondent also heard a report that a security firm may have been another target.

In a pre-dawn Saturday raid, Sunni Arab militants dressed as Iraqi army troops or US soldiers attacked families of the Jubur tribe. As long as the US military was actively patrolling Iraqi cities, and while it was paying the Awakening Council fighters directly, they were relatively safe. But as US troops have pulled back and as the government of PM Nuri al-Maliki has reduced the pay of these fighters and most often declined to induct them into the security forces, they have become increasingly vulnerable to such attacks. And this attack could well be the beginning of a vaster trend toward reprisals as the US departs and those who cooperated with it are coded as collaborators. (And as the US withdraws, foreign embassies and other institutions will require special protection by the Iraqi security forces or insurgents will try to force them out.)

In other news, the Sadr Movement closed their two-day referendum on which prime ministerial candidate their party should support. The vote has been criticized for having insufficient safeguards to prevent multiple voting by a single individual and other forms of fraud. The referendum is in a sense non-binding, since it was held at the bidding of Muqtada al-Sadr and is not mandated in the constitution.

That Muqtada al-Sadr should have emerged as the kingmaker in Baghdad is also an artifact of the US withdrawal from Iraq. As the US fades, those movements that are able to mobilize the masses will no longer be curbed by the US military, and so can assert themselves politically.

Welcome to the glimmers of a post-American Iraq . . .