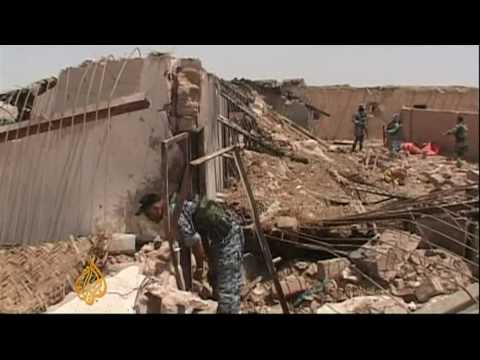 AP reports that guerrillas set off at least 4 car bombs in Baghdad on Friday, killing at least 69 persons and wounding hundreds. The target of four of the attacks was Shiite Muslim mosques or religious centers. Sunni Arab insurgents have lost the war in Iraq, but they have turned to occasional campaigns of massive bombings in a bid to act as spoilers.

There was also renewed violence in al-Anbar province.

Prime Minister Nuri al-Maliki schizophrenically alleged that the bombings were a reprisal for the killing of two leaders of “al-Qaeda” in Iraq in recent days, but then went on to warn of the dangers still posed by the Baathists (secular Arab nationalists).

The most serious attack was on a mosque in the vast Shiite slum of East Baghdad, Sadr City, killing 36 persons and wounding some 200. In the wake of the bombings, Shiite leader Muqtada al-Sadr for the first time in two years tried to deploy his paramilitary. He asked that the Mahdi Army mobilize to protect mosques “in cooperation with” the state security forces. Another Sadrist spokesman, Baha’ al-A’raji, told Al-Hayat [Life] that the Mahdi Army had only been mothballed in hopes that the central government would strengthen and would provide security. He observed that that development had not yet taken place.

Iraq is still in the midst of attempting to form a government, and this sectarian violence is intended to disrupt that process.

The militia has been under severe pressure for the past two years, and its leader, Muqtada al-Sadr, was forced into exile from Iraq in the holy city of Qom, where he is said to be acquiring the credentials that would lend him respect in the eyes of the world Shiite community. Dozens of his top commanders have been arrested and put behind bars by the al-Maliki government.

Al-Hayat says that bombings targeted two other Shiite houses of worship. One was founded by the father of fraudster Ahmad Chalabi. The other mosque is associated with the US via the Islamic Supreme Council of Iraq. This mosque is that of Muhsin al-Hakim, grandfather of the leader of ISCI nowadays, Ammar al-Hakim. Muhsin al-Hakim had been the preeminent Shiite religious authority in the 1960s. Eight persons were killed and 26 wounded at the latter site.

Sadrist spokesman Salah al-Ubaidi blamed the poor procedures of Iraq’s 11th Army Division for the security breach. He contrasted them with those of the police.