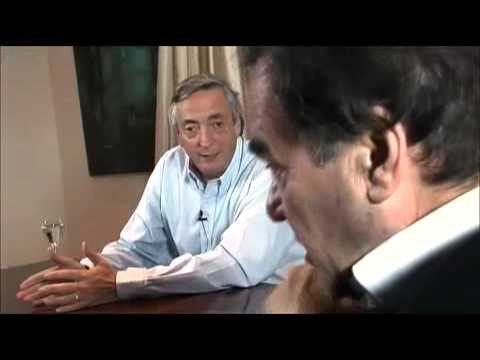 Néstor Kirchner, former president of Argentina, revealed in an interview with Oliver Stone for the director’s documentary “South of the Border” that former US president George W. Bush was convinced that war was the way to grow the US economy. Here is the video:

And here is the transcript of Kirchner’s account of the conversation at a summit in Monterrey, Mexico, in January, 2004:

‘ Kirchner: I said that a solution to the problems right now, I told Bush, is a Marshall Plan. And he grew angry. He said the Marshall Plan is a crazy idea of the Democrats. He said the best way to revitalize the economy is war. And that the United States has grown stronger with war.

Stone: War, he said that?

Kirchner: He said that. Those were his exact words.

Stone: Is he suggesting that South America go to war?

Kirchner: Well, he was talking about the United States: ‘The Democrats had been wrong. All of the economic growth of the United States has been encouraged by wars.’ He said it very clearly. ‘

Zaid Jilani at Think Progress points out that job creation under ‘war president’ Bush was in fact anemic and the whole house of cards collapsed toward the end of his tenure.

You wonder who else among the Republican elite fell for Bush’s typical piece of stupidity re: war= growth. It all depends on lots of other factors. If you borrow the money to fight the war and pay interest on it and you get no booty to speak of, then the war could ruin you, as happened to many European regimes in the early modern and modern period.

But even more outrageous is the Aztec-like willigness to rip the beating heart out of a sacrificial victim for the sake of an chimerical prosperity! Here is what was happening in Iraq around the time that Bush was boasting to Kirchner, according to Informed Comment:

AFP has raised the casualty count to as many as 23-25 killed and 130 wounded in the Baghdad car bombing of the US headquarters there.

‘ “The huge explosion turned the busy central Baghdad street outside into a battlefield inferno but the headquarters buildings inside the heavily-fortified area known as the Green Zone were unaffected. The blast came the day before Iraqi and US officials, including US civilian administrator Paul Bremer, are to meet with a wary UN Secretary General Kofi Annan in New York to discuss a future UN role in Iraq. “At least 20 people have lost their lives and almost 60 were injured,” US Brigadier General Mark Kimmitt told reporters. “It would appear from all the indicators this was a suicide bomb. We have confirmation some of those killed were US citizens, US contractors. We believe the current number is two. We are waiting for final confirmation,” Kimmitt said. Another five people were reported dead and 71 wounded at Baghdad hospitals. Witnesses claimed US soldiers opened fire in panic on Iraqis moments after the blast, but a military spokesman denied this.“ ‘

‘ Officials said more than 60 people, including six Americans, were injured in the blast on a mist-shrouded morning near the north entrance — known as the “Assassin’s Gate” — to Saddam’s former Republican Palace complex, now used by the U.S.-led occupation authority for headquarters. ‘

I’d say there is increasing evidence that the US is not in control in Iraq, and that the place may well be headed toward being a failed state for the near term. When, 9 or 10 months after an army conquers a place, its HQ is not safe from attack, this is always a bad sign. For those who keep making Germany and Japan analogies, I ask you if MacArthur’s HQ was getting blown up in Tokyo in April of 1946.’