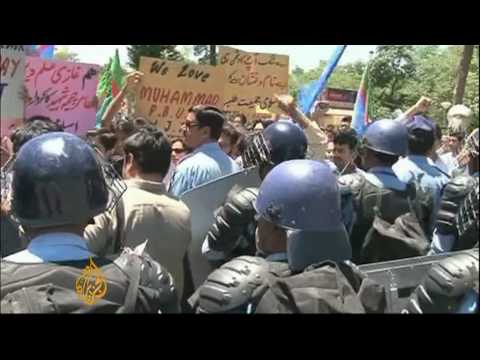 The Lahore High Court’s ban on Facebook, Twitter, Youtube and some other social media sites was supported on Friday in Pakistan by rallies of students, attorneys and fundamentalists. Blackberry services have also been banned by the Pakistani telecom authority. But these knowledge workers are unwittingly shooting themselves in the foot and raising the question of whether highly religious societies are capable of economic development.

The Pakistani Urdu newspaper Jasarat, as translated by the USG Open Source Center, reported on May 21, 2010 that there were student protests against Facebook throughout Pakistan on Friday and that:

‘students from different educational institutions in Islamabad declared to stage a protest march toward the US Embassy on May 20 and said that the students were awake and those who insulted the prophet would face serious consequences. . .

These views were expressed by speakers at the protest rally, which was held in Federal Urdu University Islamabad Campus on May 18 and was organized by Islami Jamiat-e-Talaba to protest against the publication of defamatory caricatures. Students of Federal Urdu University staged a protest rally. The students chanted slogans saying; “We are slaves of the prophet; we are ready to die in prophet’s slavery; life is worthless without love for the prophet; our leader and guide is the prophet; our last prophet is Prophet (Muhammad); boycott of Facebook.” The students carried placards, which carried slogans that they would sacrifice their lives for the sake of honor of the prophet . . .”

The rallies were called for and planned by the fundamentalist Jama’at-i Islami and its student wing. One such demonstration, in Peshawar, called for a Pakistani boycott of all ‘countries’ where the offensive caricatures of the Prophet Muhammad existed, suggesting that he thought of a Facebook page as sort of like a newspaper with a physical edition.

The bans of entire sites, services and devices raises many questions about the future of Pakistan. The Pakistani government professed itself dismayed by the breadth of the ban, but said it had no choice but to comply with the court order.

The Lahore High Court seems clearly to have been behaving high-handedly in legislating from the bench this wideranging ban. After decades of kowtowing to governments, the judiciary is now asserting its independence. But there is a danger of a sort of judicial dictatorship if the current trend lines are maintained.

In some ways, the great Facebook affair in Pakistan echoes earlier controversies in China that led to the departure of google from that country.

In turn, the controversies raise the question of whether there are limits to economic and social development in ideological states. Ironically, Pakistan is a parliamentary democracy but its judiciary, earlier a champion of democracy, is in this instance behaving like the authoritarian Communist Party of China.

Facebook, Twitter and Blackberries are not just for fun after all. They are used by businesses and NGOs. The Internet is a distributed information system dependent on interaction and innovation.

Pakistan may be consigning itself to second class citizenship in the world information community with these bans. And, in its competition with India, it may be profoundly handicapping itself. India after all has a robust internet-based business sector. It is not clear that companies such as Infosys could function and survive in a hostile enviornment in which major internet vehicles were routinely banned.

The stakes are enormous. Some 42% of jobs in Washington State in the US are now estimated to be technology-based.

Pakistan, isolating itself from the world with these measures, may be positioning itself to lose out in the race for a better economic future.