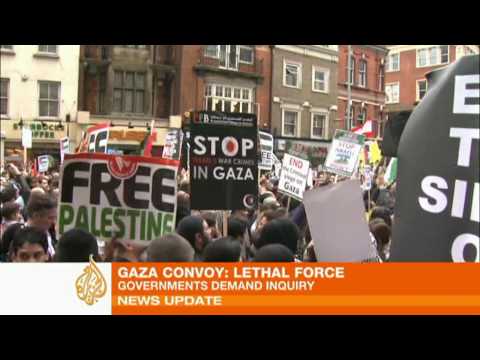 In a rare public denunciation of Israel, the United Nations Security Council on Monday condemned the Israeli raid on the Gaza aid flotilla and deplored the loss of innocent life that attended it. The world body insisted that Israel immediately release the 480 humanitarians it had taken captive, and demanded that it also let their ships go. The UNSC also instructed Israel to lift its blockade of the Gaza Strip, calling the siege “not sustainable.” Although the statement was weaker than the text urged by Turkey and the Arab world, it was brutal compared to the anodyne language usually insisted upon by Washington when it comes to Israel.

This development is head-spinning in its implications. The United States almost never allows UNSC resolutions condemning Israel to go forward (though this text was admittedly a presidential statement rather than a full resolution). But here it is clear that President Barack Obama instructed his ambassador to the UN to join in the condemnation of the Israeli “acts.” Since Turkey is currently a non-permanent member of the UNSC and led the charge on the condemnation of Israel, it is possible that the US felt it had to trade horses with Ankara if it has any chance of still getting a UNSC resolution tightening sanctions on Iran (a step that Turkey opposes, as does Brazil, though neither has a veto). It is also possible that Israel’s rash attack has sabotaged the Obama administration’s push for increased UN sanctions on Iran, hardening opposition to an Israel-driven policy toward Tehran.

The UN Assistant Secretary General for Political Affairs, Argentina’s Oscar Fernandez-Taranco, gave us some idea of the UNSC’s thinking when he called on Israel on Monday to end its “counterproductive” and “unacceptable” blockade of the Gaza Strip. He pointed out that the fiasco around the Israeli commando attack on the civilian aid flotilla would not have occurred had there been no blockade in the first place. The demand that Israel give up the siege of Gaza was repeated by the United Kingdom and by Brazil. (Nick Clegg, the new LibDem deputy prime minister of the UK, has long been a vocal critic of Israeli policies toward the Palestinian West Bank and Gaza.)

As long as Israel, therefore, continues its blockade of the general Gaza population, it is no less in contravention of the United Nations Security Council instructions than Saddam Hussein was with regard to his weapons programs in the early 1990s.

While gathering the details of how some 16 humanitarian aid activists were killed and dozens were wounded by Israeli soldiers is important, above all for the sake of justice toward the idealistic persons mown down, it is far more important that the episode produce an end to the lockdown of the 1.5 million Gazans, who have been placed by the Israeli government in a sort of open-air penitentiary.

Contrary to the assertions of far-right Israeli foreign minister Avigdor Lieberman, the Palestinians of Gaza, stripped of any citizenship and lacking any basic human rights, face continual shortages of medicine, medical equipment, electricity and even of food. They face crushing poverty and unemployment, along with inadequate hospitals. Many are still homeless after the Israelis destroyed their homes in the Gaza War, and they are being denied cement for rebuilding. They are not allowed to have a harbor or an airport. They are cut off from the market for their goods in Egypt, Jordan and the rest of the Arab world. As Uri Avnery points out, Israeli pledged in the Oslo accords 18 years ago to allow a deep water port for Gaza on the Mediterranean. Instead, it is assaulting even small aid vessels attempting to land at the pitiful excuse for a port.

The blockade is shameful. It is a gross violation of the international law governing the treatment of Occupied populations. And now the Security Council has roundly condemned it and insisted that it be lifted.

The Israeli peace organization, Gush Shalom, demonstrated in front of the detention center where the aid activists were being held..

There are no new details of the Israeli assault on the humanitarian aid flotilla early Monday morning, largely because the 480 eyewitnesses had been sequestered by the Israelis. Some, including an 81-year-old former US ambassador, a Turkish woman with a baby, and a former US navy sailor who had been on the USS Liberty when the Israelis attacked it in 1967, are now trickling home. The whereabouts and condition of many others is unconfirmed, including European parliamentarians, Nobelists, and Swedish mystery writer Henning Mankell (whose anti-imperialist novel The Man from Beijing I just read and enjoyed.)

The incident could have implications for the future relationship of Israel to the European Union. Irish Minister of Foreign Affairs Micheal Martin hinted that Dublin might go so far as to cut expel the Israeli ambassador, thus cutting off diplomatic relations with Tel Aviv. Some 8 Irish citizens are among Israel’s prisoners, and one of these humanitarians, Fiachra O’Luain, is said by his father to have been wounded by Israeli gunplay. Martin thundered, “These citizens did not enter Israel illegally — they were essentially kidnapped from international waters, taken into Israel and are being asked to sign documents saying they entered illegally.”

The other big casualty of the Israeli raid may well be the special relationship between Turkey and Israel, as the BBC says. Turkish Prime Minister Recep Tayyip Erdogan condemned the raid as “state terrorism.”

Thousands of demonstrators also gathered to chant against Israel in Baghdad, inspired by Shiite cleric Muqtada al-Sadr. Interior Minister Jawad Bulani, serving in the government of Prime Minister Nuri al-Maliki, said, “We want to send a message to the Palestinians to let them know they are not alone and that the Iraqis are with them . . . What is going on is a vicious crime. The international community must condemn it and take responsible action against them. This is the stand of all Iraqis, officially and publically.”

Historians may look back on the Marmara raid as the moment a new order began emerging in the Middle East, grouping Turkey with Iran, Syria, Iraq and Palestine rather than with Washington and Tel Aviv.

Aljazeera English has video on the world condemnation of the Marmara raid.

The enforced silence of the flotilla activists, in Israeli custody, has allowed Israeli spokesmen to shape the narrative of events for American news media. Former CIA analyst Ray Close blames President Obama for not being tougher with Israeli PM Binyamin Netanyahu to begin with, arguing that coddling the Likud leader led to this atrocity. As Jonathan Cook points out, the Israeli authorities have still not announced a definitive list of those killed and wounded by their commandos.

In response to Israeli official pronouncements, Amnesty International said, “Israel says its forces acted in self-defence, alleging that they were attacked by protestors, but it begs credibility that the level of lethal force used by Israeli troops could have been justified. It appears to have been out of all proportion to any threat posed.”

Raw video posted to Youtube from the initial phase of the Israeli boarding of the Turkish vessel, Mavi Marmara demonstrates that as the Israeli commandos approached the ship, they were laying down suppressive fire and at that point killed two individuals aboard the ship. Even after the ship ran up a white flag, the Israelis continued to use live ammunition along with stun grenades and tear gas.

See Stephen C. Webster’s analysis of this video of the boarding:

If the crew and passengers of the Mavi Marmara were coming under fire and had taken casualties in the initial phase of the Israeli approach, that horror would help explain why some actively resisted the boarding and that in turn would explain the contextless snippet of video released by the Israeli army of Israeli commandos being fought as they commandeered the vessel. If the passengers thought the Israeli military had murderous intentions toward them, some would obviously attempt to forestall the boarding. It is also possible that there were no deaths on the other ships because they were boarded later and after the Israeli helicopter gunship crews had learned that suppressive fire during the initial approach was unnecessary and counterproductive, and so they ceased that tactic.

It is unclear why the commandos behaved in this way with regard to the Mavi Marmara in the first place, but it is possible that they believed their own propaganda. The Turkish aid ships were supported by a Muslim fundamentalist charity in Turkey, IHH, that has been accused of being sympathetic to the Muslim Brotherhood and to Hamas, and in Israeli eyes that orientation would make them terrorists. So perhaps the commandos assumed they were boarding a ship full of Hamas operatives. In reality, it was just idealistic humanitarians. But even they could be provoked to active resistance if they thought they were about to be shot down.

It is a sign of to what depths the pride of the Israeli military has fallen that it is complaining of attempts to “lynch” its soldiers (none of whom was killed, while as many as 16 humanitarian aid workers appear to be dead). This is the Israeli army of the 1967 Six Days War and of Entebbe? They were in danger of being lynched as they boarded a small civilian vessel? Of course, they could have avoided this menace by simply not being uninvited on a ship in international waters. And, it is pretty obvious who is actually being lynched– the people of Gaza and anyone who objects to them being half-starved by the Israeli blockade.