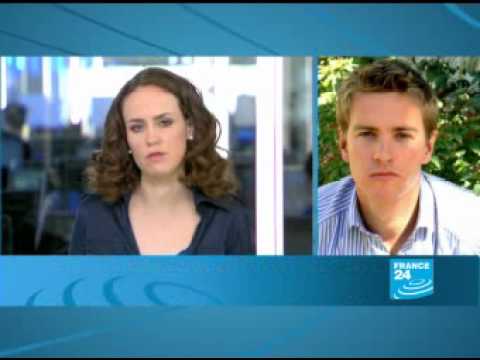 The security situation in Afghanistan continued to be bad on Sunday. In Jalalabad in the eastern Pashtun region, a roadside bomb targeting a US convoy injured 13 Afghans. It may be that the attack also killed a US soldier, since one was reported KIA in ‘eastern Afghanistan.’ In Qandahar to the southwest and in Kunduz to the north, insurgents deployed two roadside bombs, killing 6 persons altogether. The three killed in Kunduz were police, and one of those killed in Qandahar was. The bombings are part of the Taliban summer offensive called ‘al-Fath’ or Victory.

Meanwhile, it is alleged by the NYT that US aid is creating Welfare Warlords in the country.

While the world’s eyes were fixed firmly on the drama of the Israeli raids on aid convoys to the half-starved children of Gaza, the Karzai government hosted a national congress or jirga on June 2-4, which addressed issues in national policy and called for peace talks with the Taliban and other insurgents.

Here is a France24 video on the conclusion of the Jirga from a couple of days ago, in which the Guardian correspondence expresses skepticism about the possibility of mollifying the insurgent forces, with which the Jirga recommended negotiations:

The Taliban swiftly rejected the national congress’s overture, saying that they refuse to negotiate with the Kabul government as long as foreign troops are occupying their country.

As the conference kicked off, it had been attacked by guerrillas, two of them disguised as a couple.

The congress nevertheless went on with its work, but on Sunday the Interior Minister (Hanif Atmar) and the head of the National Directorate of Security (Amrullah Saleh ) were forced by President Karzai to resign over the security lapse. Jon Boone of the Guardian reports that these are not just everyday ordinary resignations. Rather, they appear to be examples of Karzai getting rid of relatively independent and highly competent officials, possibly in favor of corrupt cronies.

The Guardian talked to a Western security expert who is that Atmar and Saleh were beginning to perform, and were key to the US and NATO plan to train the country’s police, who are notoriously corrupt and largely illiterate. He is quoted as saying, “These are two of the most important people in the security sector who were finally getting a better reputation for their organs and clearing up corruption within them. If they are replaced by corrupt cronies then we might as well all pack up and go home now.”

Intelligence chief Saleh was an aide to Ahmad Shah Massoud, the “Lion of Panjshir,” a Tajik guerrilla leader of the 1980s and 1990s who fought the Soviets and then took on the Taliban until he was assassinated by Usama Bin Ladin’s hit squad on September 9, 2001. The Tajik group within the Northern Alliance had been led by Massoud, who is still idolized as a national hero. The Tajiks are an important component of the post-Taliban government, but many of them have become increasingly disillusioned with Karzai, a Pashtun. The Speaker of the House, Yunus Qanuni, is a Northern Alliance Tajik who despises Karzai and keeps rejecting his cabinet picks. Karzai’s opponent in the presidential election of last August, Abdullah Abdullah, had been the spokesman for the NA Tajiks, and the campaign turned nasty and personal, with Abdullah charging that Karzai stole it and disgustedly bowing out of a run-off into which Karzai had been forced by the international community.

During the period 1994-2001, when the Pakistani Inter-Services Intelligence was supporting the Taliban, the Tajiks of the Northern Alliance attracted Iranian, Indian and, ironically, Russian help. the first thing that the Tajik leadership did when the Taliban fell was to fly off to New Delhi for consultations. Amrullah Saleh shares the general NA Tajik dislike of Pakistan. More seriously, he believes that the insurgency is being strongly backed by Pakistan, as he told Der Spiegel last summer. This theory is overly simplistic, since the insurgency has roots among Pashtun Afghans dissatisfied with the Karzai government and with the US & NATO foreign troop presence. Moreover, Pakistan has swung around to fighting at least some elements of the Taliban and other insurgents, so the picture is not as black and white as Saleh sees it. People in Kabul are saying that Pakistan is very pleased to see Saleh out, and that relations between Karzai and Islamabad will now warm up.

Hanif Atmar, on the other hand, is a Pashtun from Laghman Province who had been a leftist when he came to political consciousness as a teenager in the mid-1980s, and served in intelligence in the Soviet-allied government of the 1980s with close links to the Soviets. He was wounded defending Jalalabad from the Mujahidin in 1988, losing his leg. He fled to the UK when the Soviets withdrew. He reemerged after 2001 and is now thought to have close relations with the British, and so his sacking could signal a distancing of the Karzai government from its Western patrons. Likewise, he was a candidate for president, competing with Karzai, briefly in winter-spring 2009, and was said to have been favored by the job by the US. So, Karzai is not only removing someone with whom he had deep disagreements and may have been closer to the American way of thinking than to Karzai’s, but he is also removing from the public eye a future potential rival.

Here is a CNN interview with Atmar on the Marjah campaign of three months ago, with which he expressed happiness. (His boss, Karzai, was known to be lukewarm about the Marjah operation.)

In another declaration of independence, Karzai acted immediately on the national congress’s recommendation that suspected insurgents now held in Afghan jails on insufficient evidence be quickly released. Officials in Kabul are clearly also putting pressure on the Americans to act similarly.

A violent confrontation was reported in the Muslim press in eastern Afghanistan between locals and foreign troops on Sunday (as translated by the USG Open Source Center):

Jalalabad, 6 June: There has been a fierce clash between the Taleban and foreign forces.

Residents of Memla area of Khogiani District of Nangarhar Province have reported a clash between the Taleban and foreign forces in their area.
Local residents say the clash occurred when foreign forces wanted to search houses in the northern parts of the village. They said the clash continued until late evening. They added that one foreign soldier was killed and evacuated by helicopter.

No reports of bombardment have been given.

The Taleban, foreign forces or government officials have not yet commented on the incident.

(Description of Source: Peshawar Afghan Islamic Press in Pashto — Peshawar Afghan Islamic Press in Pashto — Peshawar-based agency, staffed by Afghans, that describes itself as an independent “news agency” but whose history and reporting pattern reveal a perceptible pro-Taliban bias; the AIP’s founder-director, Mohammad Yaqub Sharafat, has long been associated with a mujahidin faction that merged with the Taliban’s “Islamic Emirate” led by Mullah Omar; subscription required to access content; http://www.afghanislamicpress.com)

Here is an interview with Amrullah Saleh on Aljazeera English from 2008: