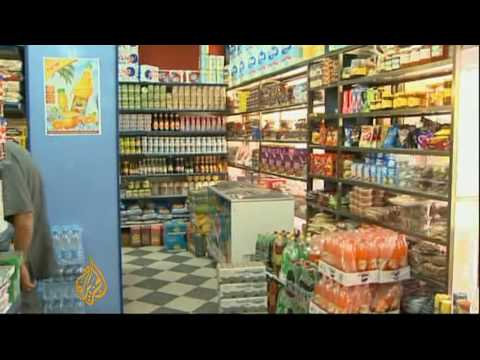 Despite the breathless flurry of approving statements provoked by the English-language pledge issued by the prime minister of Israel, Binyamin Netanyahu that the blockade of Gaza would be ‘eased,’ in fact , Haaretz reports, the Hebrew text of the communique does not indicate that the cabinet made any such decision, and there has been no change at the border checkpoint.

Even if Israel were actually doing what the English text indicated, the Palestinians, the United Nations and aid NGOs do not see the measure as going nearly far enough. PLO spokesman Saeb Erekat dismissed the announced easing as an effort

‘”to make it appear that it has eased its four-year blockade . . . In reality, the siege of the Gaza Strip, illegally imposed on Palestinians, continues unabated. Israel has a so-called ‘white list’ of only 114 items. Palestinian basic needs require at least 8,000 items that continue to be prohibited. These include essential materials for rebuilding and for waste-water treatment.” ‘

For one thing, how many items are let in is less important than the volume of each. The Irish Times quotes Robert Serry, the head of the Office for the Co-ordination of Humanitarian Affairs (OCHA). During the first week in June, imports declined by a quarter, even though Israel expanded the list of allowed imports by 11 food and health items. OCHA says that the amount of staples and aid going into Gaza is only about 17% of the goods routinely allowed in before the blockade began. So an ‘easing’ would not even restore the status quo ante of pre-2007.

Although in public and in English Israeli spokesmen stress that the purpose of the blockade is to keep arms out of the hands of Hamas, the fundamentalist party-militia that dominates Gaza, in fact an internal document ferreted out by McClatchy demonstrates that the blockade has all along mainly aimed at punishing innocent civilians. If you think about it, the idea that Hamas can form a conventional challenge to Israel, using e.g. tanks, is ridiculous.

Professor Ian Lustick argues that Israel should just take that truce Hamas is always offering, just as Egypt and Jordan have done with their versions of Hamas– and stop trying to pretend that Israel isn’t in the Middle East or that it can change the Middle East all around at will.

The Irish Times quotes Sami Abu Zuhri, a spokesman for Hamas, to the effect that “What is needed is a complete lifting of the blockade. Goods and people must be free to enter and leave. Gaza especially needs construction material, which must be allowed to come in without restrictions.” He called lifting the bans on chocolates and potato chips “frivolous.”

Christopher Gunness, spokesman of the UN Relief and Works Agency, which cares for Palestinian refugees, said: “We look at deeds not words. There is a massive amount of rebuilding to do in Gaza. Four thousand homes were destroyed, another 17,000 damaged during the [ 2008-09] war. The agency needs to repair its schools and build 100 new schools for 39,000 children.

Aljazeera English reports on the reaction of Gaza’s government. It also points out that there would be no chocolate in the Palestinian Gaza Strip if it weren’t for smuggling through tunnels. And even children’s toys had been banned, officially making the Israelis the Grinches of the Middle East.

Letting children have toys is hardly a big step toward ending the siege. If the Israelis really do, as they pledged in English, allow cement and steel in, that would at least allow the 8% of Palestinians whose homes were destroyed by the Israeli military in winter 2008-2009 to rebuild. But the main problem is with any sort of blockade of goods other than guns and explosives. The blockade kills employment and investment, guaranteeing malnutrition in children. In famines, people do not starve because there is no food. They starve because they cannot afford to buy food suddenly become expensive. Likewise, the 10% of Palestinian children in Gaza who have experienced stunted growth are just in families where the breadwinner has been unemployed for a long time and in which relief aid doesn’t quite go far enough. “Easing” the blockade will have no effect on employment, which is very low, perhaps 40%, and therefore will not address the most pressing problem.

An Italian humanitarian familiar with Gaza makes the same point at Russia Today: