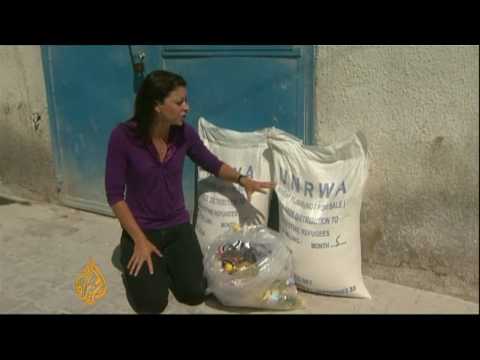 One problem with the focus the Israeli raid on the Gaza aid flotilla is that it may make it appear that the Israeli blockade of Gaza is the central issue. Then any Israeli loosening of the blockade would seem to be an advance.

In fact, the blockade is not the problem but is rather a symptom of the underlying issue, which is Palestinian statelessness. Gazans have no state. What the Israelis deign to call the ‘Hamas regime’ is no such thing because it lacks sovereignty, over its borders, air, sea, imports and exports. (The idea that Israel is ‘at war’ with its own occupied territory is laughable.) The Israeli ‘withdrawal’ of 2005 simply removed a few thousand colonists and withdrew troops, usually, to the borders. But it did not allow the creation of a sovereign state. Gazans are excluded from a third of their own farmland by Israeli restrictions on where people can live. That so many Gazans are unemployed, that their industries have collapsed, that they are food insecure, and that malnutrition is causing stunting in 10% of children– all these outrages derive from their lack of a sovereign state to look out for their interests.

The International Committee of the Red Cross issued a report this weekend detailing the harm to Gazan children and civilians of the blockade. Most do not even have clean water to drink.

Aljazeera English also reports on the impact of the blockade on Gaza’s children:

Nevertheless, the problems inflicted on Gazans by the Israeli blockade will not be resolved by a loosening of the blockade. They will only be resolved by the bestowal of citizenship on Gazans, either by a Palestinian state (which does not exist and would have to be created) or by Israel (which does not want the Gazans as citizens but may end up being stuck with them).

But in Gaza there is no political process and no prospect of one. The fundamentalist party, Hamas, won the January 2006 parliamentary elections in the Palestine Authority. But the Israelis and the US immediately rejected its victory and kidnapped parliamentarians and disrupted the government and then supported a coup in the West Bank by Fatah, the secular nationalist party of president Abbas. An attempt to extend the coup to the Gaza Strip failed, so Hamas remained in power there. The Israelis have attempted to overthrow and dislodge Hamas, including through the blockade on ordinary civilians and through the 2008-09 Gaza War, but so far have failed.

Unless a way can be found to hold legitimate elections in Gaza, it will remain isolated, even from other Palestinians in the West Bank, both politically and economically, so that the lives of its inhabitants will continue to be hell. The Israeli far right, now in power politically, will use the isolation of Gaza to argue that there is no single Palestinian representative with whom they can negotiate, and that they therefore do not need to negotiate, and can go blockading Gazans and stealing the land of West Bank Palestinians.

To repeat: the Israeli blockade of Gaza is a war crime and it is harming the health and well-being of the Gazans. But it is not in and of itself the problem, such that easing the blockade solves anything fundamental. Incorporation of Gazans into a sovereign state such that they have citizenship and can exercise popular sovereignty is the key to any real advance.

It seems to me therefore less than earth-shaking that the White House is backing an internal Israeli inquiry into its fatal raid in international waters against an aid flotilla that aimed at helping the civilian population of the Gaza Strip. The commission will have some distinguished Europeans on it as observers, but the performance of the Israeli authorities with regard to investigating their own during the 2008-2009 Gaza War and Tel Aviv’s demonization of Judge Richard Goldstone and the Goldstone Report do not encourage confidence. Moreover, even if the commission found that Prime Minister Binyamin Netanyahu erred in sending commandos to board the Mavi Marmara aid ship, it is hard to see how the ordinary people of Gaza would benefit from such a finding.

In any case, Washington and Tel Aviv no longer have infinite time to resolve the issue. The blockade of civilians is backfiring on the Israelis by provoking more and more aid ships.

Even little Bahrain is sending aid to Gaza. And, Iran is planning an aid flotilla (I expect real trouble over that one). And Turkey is planning another, this time possibly with the Turkish prime minister aboard (major international conflict looming, possibly even hostilities).

The international community has to stop dithering and intervene to end this Israeli lawlessness in Gaza, and provide a path for Gazans to citizenship in some sovereign state. The consequences of not doing so are now potentially explosive.