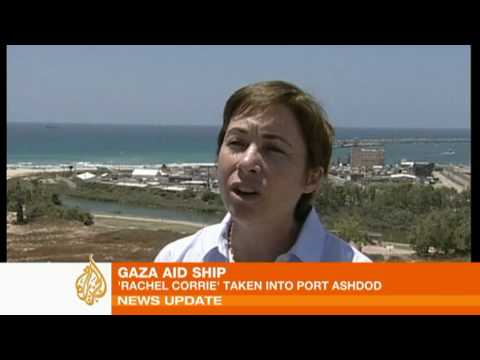 Waves of protests and governmental denunciations against Israel’s attack on the Mavi Marmara relief vessel last Monday washed over the world, even as Israel raided and captured another aid vessel, the Rachel Corrie. The demonstrations, while widespread, did not typically involve more than a few thousand persons in each city. The firmness and frankness of the governmental condemnations were often the real story.

Aljazeera English has video of the capture of the new ship:

In my view, the most important demonstration was the one held in Tel Aviv, sponsored by the Israeli Left, and consisting of some 6,000 activists. The horrific and also brain dead tactic of mounting suicide bombings against ordinary Israelis, adopted by some radical Palestinian groups in the first part of this decade, had killed the Israeli peace movement and given the Israeli Right the opportunity to capture the government and use its resources to intensively colonize Palestinian land. Despite what the US press keeps saying, a majority of Israelis has consistently supported trading land for peace in opinion polls. On Saturday, we heard once more from the decent Israeli left and center, who routinely call the ultra-orthodox who vote for Shas, a pillar of the Netanyahu government, “Taliban.” If the Palestinian leadership can restrain the radicals among them and go on cultivating non-violent tactics like the growing boycott of goods made by West Bank colonies, and preferring to import Turkish goods, they may finally have a winning formula.

Anger remained deep in the Turkish public according to polling, with over 60% wanting stronger Turkish government action against Israel. One pollster said, “The public is in such a state that they almost want war against Israel.” Even more scary, some Turkish intelligence analysts and officers appear to be entertaining a conspiracy theory that Israeli intelligence, Mossad, is hand in glove with the Kurdish Workers Party (PPP) terrorist group in its bombings of eastern Turkey.

In France, at least 17,000 protesters came out in various cities, including the capital, Paris.

The Northern Ireland government also condemned the raid and the siege of the people of Gaza even as small rallies were held in Belfast.

In Edinburgh, Scotland, as many as 5,000 protesters marched through the center of the city. And, the Scottish government issued a statement:

“The Scottish Government condemns the Israeli authorities’ actions that resulted in the tragic loss of life on the Mavi Marmara,” the statement read. “We have added Scotland’s voice to that of the wider international community in condemning it, and calling for the immediate lifting of the Israeli blockade of Gaza.”

Then, the Swedish Port Workers Union announced that its members would boycott Israeli ships and goods during the third week in June.

Thousands of protesters also came out in London. The satellite station Aljazeera English has video:

Whereas protesters and their governments were on the same side in the UK, in Germany the rallies were mostly sponsored by immigrant Turkish and Arab groups.

The demonstrations in themselves will have little impact on Israel’s policy toward the half-starved Gazans. After all, much larger demonstrations were unable to stop the 2003 invasion of Iraq or either the 2006 Lebanon War or the 2008-09 Gaza War. But the straightforward public condemnation of Israeli policies from so many highly placed governmental quarters strikes me as a new thing. And it could change policy.