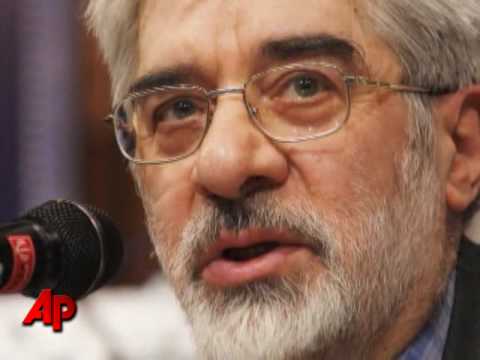 Small protests broke out around Iran on June 12, the anniversary of the 2009 presidential election, which protesters say was stolen by the country’s clerical Leader Ayatollah Ali Khamenei on behalf of his favored candidate, Mahmoud Ahmadinejad.

The Associated Press has video:

What was the Green Movement? A debate rages among Iran-watchers. Partisans see it as a sign that Iran is on the verge of a massive democratization. Critics see it as an exaggerated hiccup, barely more important than the student protests of the late 1990s, which amounted to nothing. Which interpretation is right has implications for US foreign policy. If the regime is tottering, the Obama administration can afford to batter it with sanctions and ignore it, hoping to help it fall. If it is strong and enduring, then it will have to be dealt with and probably direct negotiations are called for.

The reality lies in the middle. Named in honor of the color associated with the descendants of the Prophet Muhammad, among whom presidential candidate Mir Hosain Mousavi is counted, the Green Movement is a social movement that protested what its followers saw as the stealing of the June 12, 2009, election by Mahmoud Ahmadinejad and his patron, Ayatollah Ali Khamenei.

It is certainly the largest social movement in Iran since the 1979 Islamic Revolution. It is frankly ridiculous to class it with the earlier small student demonstrations.

Sociologist Charles Tilly defined a social movement as a cluster of groups that challenge the state in a sustained way, engaging in an attempt to effect some change in the status quo. A movement is not an organization and so lacks the institutionalization and reporting lines of a political party’s electoral campaign. If that distinction is kept in mind, we can call a social movement a sort of campaign for some goal.

The civil rights movement of Dr. Martin Luther King and his associates is probably the best example of a successful social movement recognizable to most Americans.

The social movement attempts to demonstrate that it has large numbers of committed members, that it is united, and that it should be taken seriously.

To this end, the social movement engages in public political action, including demonstrations, processions, rallies, making statements, and sometimes violence and contention. But it also appeals to cultural symbols as part of these contentious gatherings.

The Green Movement failed in its initial goals, which were to force an aboveboard investigation of fraud in the June 12 election results, and possibly the holding of a new election. It is now sometimes forgotten that the movement did not seek the overthrow of the government of the Islamic Republic of Iran. It was about who should be president, and about insisting that the electoral institutions of that republic– the presidency and the parliament– be chosen through popular sovereignty without intervention from the appointive institutions (the supreme clerical Leader, the judiciary, the security forces).

The Greens probably did, however, succeed in weakening the legitimacy of the regime. Whereas before June, 2009, few Iranians would have been willing to say that supreme clerical leader Khamenei is a crook, a significant number now doubt his probity. That number is not a majority, but it is a vocal minority. In that sense, the debacle of the 2009 election saps Khamenei’s authority just as the priest pedophile controversy has much weakened Pope Benedict among Catholics. Those analysts who discount cultural movements and the whole idea of legitimacy as underpinning authority will be unpersuaded that this change is important. But I believe it is, in the medium to long term though not in the short term.

The downside for the regime is that it must now depend more on power (i.e. imposition of rule by force) and less on authority (the likelihood that a command will be obeyed voluntarily). Regimes based on brute power are less often long-lasting than those based on authority.

I argued at Tomdispatch that US and Israeli hypocrisy also helped the hardliners internationally.

The Greens could not split the generals and they could not withstand the onslaught of the dedicated security forces. They could have nevertheless won, perhaps, if a majority of parliamentarians and major clerics on the Guardianship Council were to swing behind their demand for new elections. No such swing occurred. The speaker of parliament was willing to criticize Ahmadinejad, but not to try to unseat him. The Guardianship Council in the end stood with Khamenei.

One final possibility would have been for the movement to become so popular that it was able to put large numbers of people in the street sufficiently often, and to mount strikes and other crippling forms of contentious action with sufficient regularity, to make the ordinary functioning of the government impossible and so to force a compromise. But they were unable to maintain the momentum of the second half of 2009 in the new year, and could not be so disruptive throughout the country as to force the regime to the negotiating table.

Unlike the US civil rights movement, which had as its major goal the repeal of Jim Crow laws, the Green Movement has no single, simple, legislative object that could easily be implemented by parliament and the supreme leader. It has not been able to force Ahmadinejad to resign or to force new elections.

This failure to achieve a practical political change at the top in the course of a year does not indicate that the Green Movement is unimportant or dead. It can survive and be influential if it finds new tactics or repertoires of sustainable collective action that cannot so easily be forestalled by the security forces, and if it identifies some simple, practical change it wants legislated other than the holding of new elections. It should be remembered that the Civil Rights movement in the US took about a decade to succeed legislatively, and much longer to effect real social and cultural change.

If it is a movement for free speech and political transparency, then it should put forward a program for legislation that would implement these ideals, and keep the pressure on the regime to enact it.

In the meantime, the Obama administration must face certain realities: