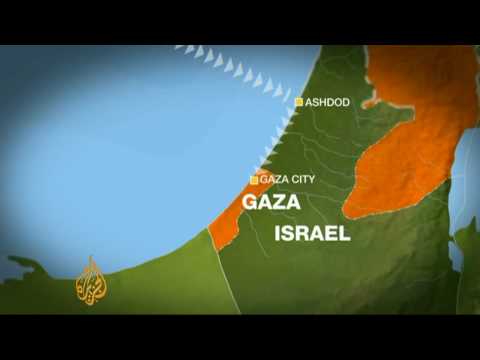 Al-Sharq al-Awsat [The Middle East] reports in Arabic that the Libyan aid ship, Amaltheal (“Hope” or Amal in Arabic) docked late Wednesday at al-Arish in Egypt, bearing 2000 tons of aid supplies for the Palestinians.

The ship’s odyssey from Greece was marked by uncertainty and danger for the 21 passengers. It developed a mechanical problem that made it move very slowly on Wednesday. There was a question about whether its captain might try to take it right into Gaza, which is blockaded by the Israeli military. At one point the ship was surrounded by 8 Israeli war vessels.

Intensive diplomatic efforts were launched to convince the Libyan government and the Qadhafi Foundation to divert the ship to al-Arish. The USG Open Source Center translated a report of the Voice of Israel Network B broadcast on Wednesday:

‘ The Jewish-Austrian businessman Martin Schlaff is mediating between Israel and the Al-Qhadhafi fund in the efforts to prevent the Libyan ship from reaching the Gaza Strip. This was what our Arab affairs correspondent Eran Singer was told by Arab diplomatic sources. Foreign Minister Avigdor Lieberman’s bureau refused to comment on the alleged diplomatic contacts regarding the Libyan ship and would therefore neither confirm nor deny the report. Our correspondent reports that businessman Martin Schlaff maintains close contacts with the Libyan authorities and is also known for his ties to Minister Lieberman.’

Aljazeera English has video, including from a correspondent aboard the al-Amal:

The Israeli power elite viewed the outcome as a victory. The USG Open Source Center translates a Hebrew language report from the Voice of Israel Network B, broadcast on Wednesday, July 14, 2010:

Deputy Foreign Minister Dani Ayalon said that Israel can chalk up a victory in its dealings with the Libyan ship. He said that the fact that the United States and EU had urged the ship’s captain to accede to Israel’s demands granted legitimacy to the latter’s policy. Ayalon told Network B’s anchor Arye Golan this morning that the determination shown by Israel toward the previous flotilla had contributed to its effective policy. As for the possibility of Egypt inspecting the ship’s cargo and then shipping it to the Gaza Strip, Ayalon clarified that Egypt and Israel had a shared interest in preventing HAMAS’s military buildup in the Gaza Strip. ‘

Contrary to what the far rightwing ideologue Ayalon asserted, the incident was no victory for Israel. al-Quds al-Arabi reports in Arabic that the Qadhafi Foundation is maintaining that it extracted several concessions from Israel in return for diverting to the Egyptian port, including a pledge that travel abroad for treatment of ill Palestinians in Gaza would be expedited and reconstruction projects would be allowed to go forward (one in 8 Palestinians in Gaza had their homes destroyed in the 2008-2009 Israeli assault on the Strip.)

The episode showed the continued determination of NGOs and governments to break the illegal and inhumane siege of civilians in Gaza, which, despite Israeli announcements, has not in fact been much eased. It is illegal in international law for an Occupying power to blockade the civilian population for the welfare of which it is responsible. Israeli politicians’ assertion that their blockade is legal and must be observed by third parties is incorrect, since blockades that primarily punish civilian populations are illicit on their face and cooperating with them is against the law.

The Qadhafi Foundation is very unlikely to be the last NGO to attempt to get aid to Gaza, and each round of attempted relief will put Israel in a bad light in the eyes of the world and will risk Israeli violence against a humanitarian mission. And if each such mission does extract concessions from Israel, then over time the blockade of Gaza will collapse. I cannot understand the blockade policy anyway. If the point is to convince the people of Gaza not to vote for Hamas again, then wouldn’t you have to schedule elections to discover if the policy has succeeded? It would be illegal to punish the civilian population for such a purpose, but at least the policy would have an end-point. But no elections are scheduled. In that case, the blockade is just Israelis being unbearably mean to Palestinians for an extended period of time, with no practical political objective on the horizon. Except maybe to keep the Palestinians weak and at least slightly malnourished for as long as possible.

Meanwhile, the Israeli government has gone back to destroying Palestinian homes in Jerusalem. These actions have repeatedly been condemned by the European Union as illegal. Richard Falk says that some Israeli policies in Jerusalem, including a plan to expel some Palestinian residents, may even constitute war crimes. The timing of the move was a slap in the face of Egyptian President Hosni Mubarak, who was about to meet with Israeli Prime Minister Binyamin Netanyahu. Mubarak hastily cancelled the meeting. The Egyptian government’s close cooperation with Israel is deeply unpopular with the Egyptian public. The house demolitions were also further affronts to President Barack Obama, since they are obstacles to the direct Israeli-Palestinian talks for which Obama has been pushing. Aljazeera English has video: