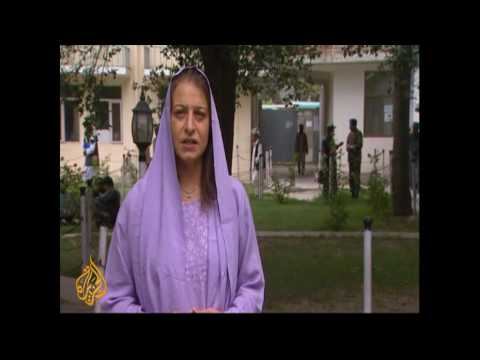 The Afghanistan War claimed another 5 NATO troops, it was announced Saturday, two of them American and two British.

Taliban blew up the gate of the main prison in Farah Province in Afghanistan, briefly releasing about 20 inmates from captivity. Four were arrested when they were wounded in the bombing, and 7 more were recaptured by police. It seems about 9 are still at large. But there should have been pylons in front of the prison gate to stop this sort of attack.

The Independent reports that it has seen the text of a resolution expected to be adopted at Tuesday’s conference of major donors in Kabul, which calls for NATO military forces to depart Afghanistan by 2014, turning it over to the new Afghanistan Army and the Kabul government.

Authorities say that a bomb plot against the donor conference has been rolled up. Kabul has been the target of many bombing campaigns in the past year.

The document is said to declare, “The international community expressed its support for the President of Afghanistan’s objective that the Afghan National Security Forces (ANSF) should lead and conduct military operations in all provinces by the end of 2014.”

How, you may ask, can Afghanistan possibly hope to pay for a $2 bn. a year military force when its annual government budget is only $1 bn. in all? The document goes on to pledge that the international community “provide the support necessary to increase security during this time, and the continued support in training, equipping and providing interim financing to the ANSF at every level to take on the task of securing their country…”

The problem is that the Afghanistan National Army is 90% illiterate, poorly trained and officered, and has shown no appetite for long slogging battles against insurgents. This BBC report falls for a British military propaganda message, which is that a 500-man Afghanistan military unit planned and carried out an operation against insurgents in Helmand province. But then we get to the fine print at the end: ‘ “The MoD [Ministry of Defense] said the area was “thought to be dominated by the Taliban, but in the sweltering heat of the first morning there was no contact with the enemy.” As the Afghan forces moved further east into the area of Yakchal, one unit came under sporadic fire, the MoD said but support from ISAF Apache helicopters dispersed the insurgents. ‘

In other words, the ANSF did not make significant contact with the enemy in the course of this heralded independent operation, and when the unit received light arms fire, it just called in NATO airstrikes on the enemy.

A turning point came in Iraq when the Iraqi army (after some hesitation) obeyed PM Nuri al-Maliki’s orders to attack the Mahdi Army in Basra, stood and fought in poor neighborhoods such as Hayaniya, and subsequently manned checkpoints and restored a modicum of security to the city. They, too, had significant foreign air support. But we just haven’t seen a Basra moment in Afghanistan and so some skepticism about the capabilities of the Afghanistan army is in order. But the US and its NATO allies can’t get out unless the ANA does step up.

A sign of not stepping up is when your provincial prisons are relatively easily blown up and insurgents captured with blood and treasure can just walk out again.

Aljazeera English reports on reconciliation steps between the Afghanistan government of President Hamid Karzai and the Taliban. These include releasing those imprisoned without good evidence against them, an amnesty for fighters who come in from the cold, and attempting to get Taliban leaders taken off the UN terrorism list so that they can be negotiated with: