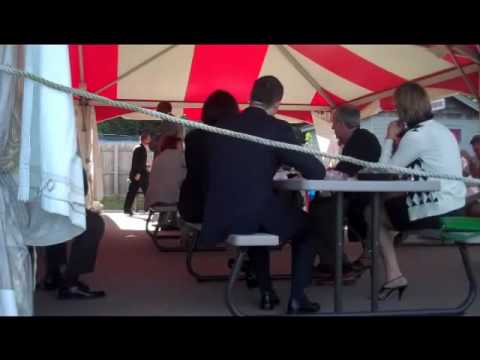 Republican National Committee chairman Michael Steele has provoked a furor by remarks he made on President Obama’s Afghanistan policy at a GOP fundraiser in Noank, Ct. (where he mumbled on for all the world like a third-rate lounge lizard at an off-off the Strip Vegas discount casino before an audience mesmerized into zombiehood by its subsidized lunch buffet). The speech appears to have been secretly recorded, and is now on the Web. Geo at the Right Vs. Left blog put up a transcript of Steele’s comments.

The Republican line on the Afghanistan War is apparently that it is a good war, well-fought, but has the misfortune to be overseen by Obama, who, despite personally ordering all the elements of the war that the GOP praises, is nevertheless somehow an inappropriate leader of it.

Self-contradiction poses no conundrum for politicians as long as the public does not notice it. That it is illogical to denigrate Obama as leader while praising the troop surge and the counter-insurgency strategy that he authorized appears not to occur to anyone south of the Mason-Dixon line. Conservatives (with the exception of Libertarians) can embrace this paradox because they hold twin premises. The first is that the United States should always be at war and all of its wars are glorious, righteous and beneficial to all concerned, even the enemy. The second is that a Democratic president is sort of like gay marriage; it is against nature and intrinsically wrong, and while it may actually exist in some times and places, it must be vigorously ignored until it can be undone and safely forgotten about. With a Democratic president in the White House, the munificent War must resemble the virgin birth, having no human author and yet bestowing infinite grace on all.

Steele violated this both-sides-of-the-mouth absurd discourse every which way from Sunday. He attributed the war to Obama, restoring him as commander-in-chief, a presidential epithet applicable only to GOP heads of state. Steele said that Afghanistan “was a war of Obama’s choosing. This was not something that the United States had actively prosecuted or wanted to engage in.”

Then Steele openly said that the war, far from being magnificent and beneficent, is actually a Major Mistake and almost certain to End Badly. He said that if Obama

“is such a student of history, has he not understood that you know that’s the one thing you don’t do, is engage in a land war in Afghanistan? Alright, because everyone who has tried over a thousand years of history has failed, and there are reasons for that. There are other ways to engage in Afghanistan…”

(I would argue that it is actually only since Afghans began learning how to manufacture [in artisan style] hand-held firearms that they have become truly formidable, i.e. from the late 1600s.)

Steele’s remarks on Afghanistan can be distinguished from those of Denis Kucinich only insofar as the RNC chairman complained about Obama’s ‘demonization’ of the Iraq War (as if it had actually gone very well and been unproblematic, deserving none of the opprobrium heaped upon it by mere reality). Steele said, “But it was the President who was trying to be cute by half by building a script demonizing Iraq, while saying the battle really should in Afghanistan.” Other than his attachment to a war launched in impudent violation of the United Nations charter and all subsequent international law, which killed perhaps a million persons, wounded 3 million and displaced and made homeless another 4 million… Steele sounded like a left-wing Democrat. He seems to have been reading Ann Jones at Tomdispatch (would that more GOP officials did).

Here is the video; turn the audio way up:

Having delivered himself of the only principled and sensible arguments he has put forward since the Good Old-boy Party humorlessly made him its public face, Steele now faces demands by the hounds of the Right that he resign in ignominy. When Bill Kristol, who has notoriously been Wrong about Everything, demands that an RNC chairman resign, it can only mean that the party has a choice between reviving Neoconservatism– which is pernicious but creepily coherent as a nihilist ideology of perduring destruction– and muddling along with no positive message at all.