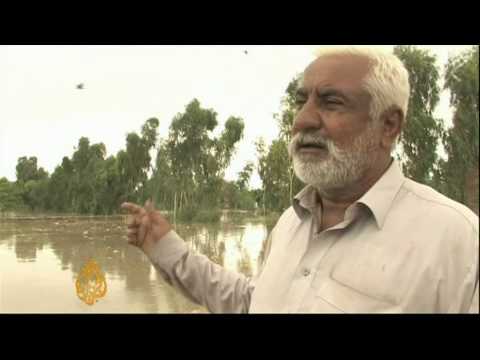 The horrific flood in Pakistan, the worst in its history, has now destroyed more homes (650,000) than the 2005 earthquake. And, some 12 million Pakistanis, nearly 10 percent of the country’s population, have been at least somewhat affected by the floods. About 1600 persons have been killed.

The floods, having hit first the Khyber-Pukhtunkhwa Province and the Swat Valley (earlier menaced by the Pakistani Taliban), and then southern Punjab, the floods are now heading toward Sindh, a major agricultural region.

The flooding is also shutting down power plants in a country that only generates 80% of the electricity it needs.

The ruling Pakistan People’s Party is being widely criticized for its failure to respond to the massive needs of the people, generated by this catastrophe. And President Asaf Ali Zardari’s visit to the UK, where he met with British Prime Minister David Cameron, has provoked a firestorm of criticism from Pakistanis who think he should have stayed home and helped manage the crisis.

Anything that could pull down the government, as an inept response to the flood could, has security implications in the fight against the Taliban. (The Pakistani Taliban have actually taken advantage of the chaos to launch some attacks).

Aljazeera English has video on the Punjab situation:

And here is AJE’s report on the Swat Valley: