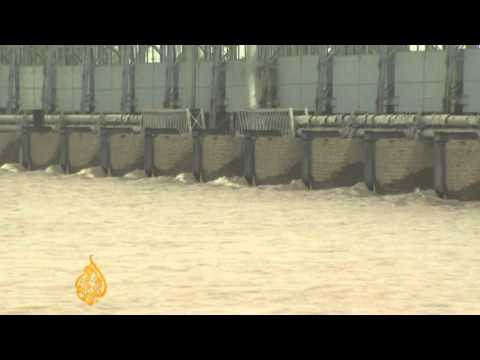 The raging, swollen Indus River abruptly breached an embankment in the Thatta district in Sindh, Pakistan, on Wednesday evening, unexpectedly sending flood waters toward the town of Thatta and several others in the district. Panicked residents tried to flee in the thousands.

The News writes, “Villagers fled trailing north in vans laden with furniture or crowded into buses, or in carts pulled by oxen. Some people were on foot, leading their livestock. Water lined the road from Hyderabad to Thatta town, as workers frantically used bulldozers to dig embankments only just higher than the flooding, and where people camped out under open skies or in makeshift tents.”

Lord Julian Hunt argues that global warming is responsible for the floods and that such extreme weather events in India and Pakistan are becoming more common as time goes on. Hunt is former director-general of the Meteorological Office in London.

The US government contribution to flood relief is now approaching $200 million; a decision has been taken to divert $50 mn. from the Kerry-Lugar act, which had already authorized development aid, to the relief effort.

Aljazeera English has video on this new challenge:

As if another several hundred thousand people hitting the road with inundations breathing down on them were not bad enough, now the Pakistani Taliban are threatening to attack foreign aid workers trying to help the victims.