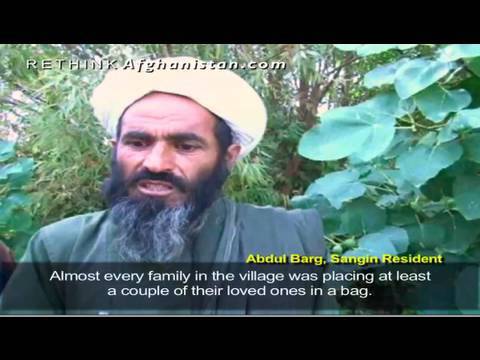 Between 4 and 12 civilians were killed by US troops in a nighttime raid in Nangarhar province on Wednesday, NATO admitted today. Nangarhar has repeatedly been the scene of public protests against the foreign troop presence. In fact, the wikileaks Pentagon documents show that local protests against US and NATO troops have been widespread, routine, and largely unreported in the Western press. In Nangarhar, protesters have sometimes blocked main roads, demanding that the Yankees go home.

NATO is still denying a massacre of civilians in Sangin, Helmand Province, last month. But on Friday the presidential palace in Afghanistan issued a report finding that 39 civilians were killed in the fighting. Civilian casualties are the main cause of dissatisfaction on the part of most Afghans with the NATO & US troops in their country, and the Sangin finding signals an unwillingness of President Hamid Karzai to play the issue down down or sweep it under the rug.

Brave New Foundation has video interviews with the survivors at Sangin:

That the Pentagon and NATO cover up Afghan civilian deaths on a routine basis is clear from the Wikileaks documents on the Afghanistan war, and it is hard not to see the Pentagon’s stonewalling on Sangin as part of this long-term and widespread pattern.

The usually unflappable Tom Engelhardt is exercised that White House and Pentagon officials denigrated Wikileaks founder Julian Assange as having blood on his hands when the very documents they are trying to cover up or from which they wish to avert attention are chock full of reports of innocent civilians killed, with GIs sometimes covering up the killings via euphemisms or incomplete reporting. Engelhardt is also right that the US press reaction to the leaked documents was to mostly ignore the issue of Afghan civilian deaths, unlike the Guardian in the UK.

What you want to bet that at some point the Pentagon comes forward, and admits that there were after all some Afghan civilians killed at Sangin, but that they will do it after the controversy has died down, and they will minimize the numbers (that 4-12 thing is a pretty good trick, since they hope people will focus on the ‘4’ and will also disregard Afghan claims of many more killed.)

For more reporting on the Forgotten War, see Ann Jones at Tomdispatch, who has lived and breathed it on the ground.

In all wars, control of press reporting on the war effort is one key to success and public support. Since the fighting in Afghanistan is so hard to cover up close for independent reporters, they are mostly forced to do a Soviet-style embed, where they risk losing their objectivity and are sometimes turned into active-duty soldiers themselves. Being embedded thus becomes highly desirable, and can be doled out to reporters as a privilege for cheerleading the war. Thus, reporters such as Michael Hastings, who wrote the McChrystal story for Rolling Stone that got the general fired, has been turned down for a spot as an embed.

That will teach him to tell the unvarnished truth about that war.