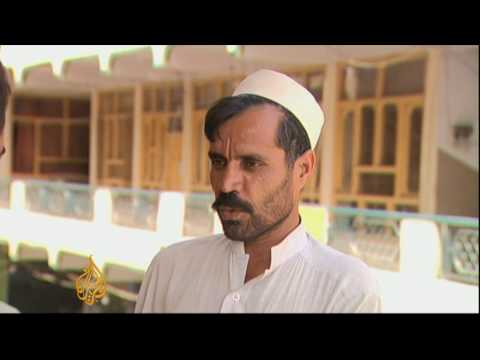 A former Afghan warlord who turned to supporting President Hamid Karzai and two others were blown up at a soccer match in the northern city of Qunduz by Taliban.

A bus full of civilians on its way between Helmand and Qandahar provinces in the Pashtun south hit a roadside bomb, which killed 6 and wounded 9 of the passengers. The Taliban presumably set the device for a NATO or Afghan National Army convoy, but the poor bus passengers got hit instead. The Taliban are responsible for 61% of the civilian casualties in the past six months and more in the past month.

Kunduz is only 1/3 Pashtun, the ethnic group from which the Taliban spring (though most Pashtuns oppose the Taliban). But they are using guerrilla tactics to even the playing field. The US is now putting troops into Kunduz, formerly a mainly German zone, since the Germans only signed on for peace-keeping, not for counter-insurgency.

Virtually everywhere you look, then, Taliban influence is rising and spreading. One has to ask why the influence of the Afghan government isn’t doing the same, and more effectively. Karzai had enormous advantages over the Taliban, including massive aid donations, US backing for his armed forces, and the unpopularity of the Taliban with the Afghan people. by now, Karzai appears to have frittered away those advantages….