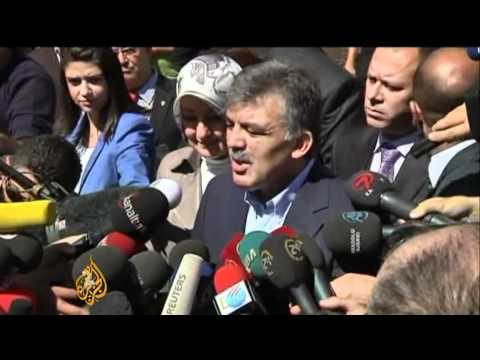 The question in the American blogosphere seems to be whether the referendum on Turkey’s constitutional changes was good for democracy or good for the sharia (the system of Muslim law, analogous to Roman Catholic canon law, against which the American right wing is now rallying).

First of all, no one in Turkey is talking about implementing medieval Muslim laws, including the ruling Justice and Development Party– which does want fewer restrictions on the public role of religion in Turkey. The changes to the constitution just make it more difficult for the powers that be to marginalize believers. But to my knowledge, none of the amendments had anything to say about religion or religious law per se.

Second of all, what are American evangelical Christians and Roman Catholics who want to ban abortion (even though there is no secular reason to do so) doing but trying to impose on all Americans their Christian sharia? The people most against the former seem to be all for the latter.

Turkey has been run for decades as a secular semi-dictatorship in which the army was the guardian of the country’s secular values, imposed from above. Turkish secularism is on the militant, French model, in which the government sees itself as an active critic of religious belief and institutions, rather than on the American model, where the government is supposed to be neutral. The army achieved this goal by monitoring officer cadets for signs that they might be religious and then summarily expelling them if they were found to be. One older Turkish intellectual who had been roped, as a university administrator, into assisting with such an expulsion, confessed to me his continued guilt about it. In other words, the Turkish officer corps has been the opposite of the American air force officers, where you pretty much have to be an evangelical Christian or you are hazed.

The other institution that has been deployed actively to discriminate against believing Muslims seeking public roles is the judiciary.

The referendum will make it harder for the army to police itself and keep out believers, by giving those expelled more rights of appeal. It will also weaken the autonomy of the judiciary. Admittedly, the latter step could prove pernicious, and there are legitimate concerns about it. Still, it should be remembered that the judiciary is largely staffed by judges already vetted to support the secular elite, and has often exercised its powers in the past on behalf of that elite.

It is likely, it seems to me, that the outcome of these changes will in fact be a greater role for believing Muslims in Turkish political and public life. I can’t see what is wrong with that, or how it is contrary to democracy. The old Kemalist system of secularism imposed from above by an urban, educated elite, in such a way as to marginalize much of Turkish society, accomplished good but also created inequities.

Moreover, the constitution that is being amended was imposed by martial law. Letting the public weigh in on it, California style, restores a democratic character to at least some of it. Thus, the new constitution will allow much more in the way of union organizing by labor and restores the right to collective bargaining to public sector employees (though still not in the private sector). The generals who made the 1980 coup killed organized labor and the political left (which, ironically, paved the way for the Muslim-tinged right, on the analogy of the Christian Democrats in Germany, to come to power, since discontent had to go somewhere and it could not go left any more).

So, ironically, it is not impossible that Recep Tayyip Erdogan has just given a at least some aid and comfort to Turkish leftist and labor movements, which could begin reviving over the next decade– providing a counter-weight to Erdogan’s own more right-of-center emphases.

And, many of the changes were asked for and endorsed by the European Union as a prerequisite for EU membership, which still cannot be ruled out for Turkey (it is a candidate). The EU simply will not admit military dictatorships or countries that explicitly discriminate based on who people are.

So, the question was not democracy versus sharia. It was a more inclusive sort of democracy that might make a legitimate place for believers in politics and public life, versus a continued soft military dictatorship with secular-supremacist tendencies.

And here, Aljazeera English explains some of the amendments.

For the political geography of the vote, see Kamil Pasha.