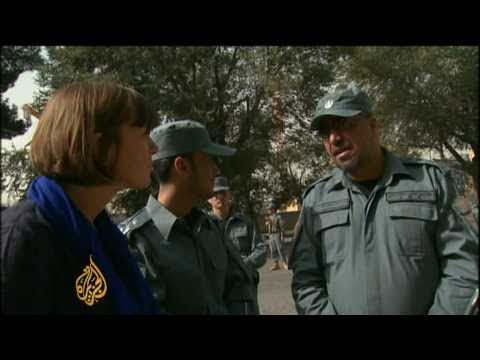 As Afghans went to the polls Saturday morning, Taliban slammed a rocket into the area of the capital where the Radio and Television building stands. It caused no casualties. Pajhwok News Agency reports that 40 private hospitals in Kabul have made plans for extended hours because of the election, which they clearly expect to be marred by violence.

Graeme Smith reports on the parliamentary elections in Afghanistan, pointing to the potential for fraud. President Hamid Karzai stole his own election last year, and he has taken over and appointed cronies to the Electoral Complaints Commission. That body was the only one that even tried to make a stand against Karzai’s ballot-stuffing, and it is no longer independent of the presidency. At the same time, printing presses are working overtime to produce phony ballots.

Karzai has faced minor rebellions from the lower house of parliament over issues such as cabinet appointments. The speaker of the house, Yunus Qanuni, is an ethnic Tajik who had been among the leaders of the Northern Alliance, and has often crossed swords with Karzai (a Pushtun). Smith quotes Karzai as saying, “We want to send a team to the Afghan parliament which will not be against the Afghan government.” That is, the point of the elections from Karzai’s point of view may well be to install a compliant debating club full of yes-men.

Smith also suggests that in the southern city of Qandahar, turn-out may be as low as 5 percent. Even notables who had been committed to the earlier elections are saying they won’t bother to vote this time, since they were disgusted by the fraudulent presidential elections last year. Aljazeera Arabic’s correspondent in Qandahar is reporting on Saturday morning that turnout is very light in that city, confirming Smith’s suggestion.

A BBC correspondent says he had to be helicoptered to Ghazni from Kabul because it was too dangerous to attempt the two-hour drive.

The Afghan Islamic Press for September 17, 2010, reports, via a translation by the USG Open Source Center, that in Herat, a bomb went off near the home of a candidate for parliament, but caused no casualties.

In a western district of Herat province, gunmen kidnapped a candidate for parliament and three other people, demanding $80,000 in ransom.

In a district of Qunduz, a roadside bomb hit the car of another candidate for parliament. Mawlawi Abdollah Qarlaq told AIP: “A mine hit my vehicle in the Tajekan Village of the Qarlaq area of Archi District yesterday evening. One of my friends was wounded, but I survived unhurt.”

Aljazeera English has video on the election: