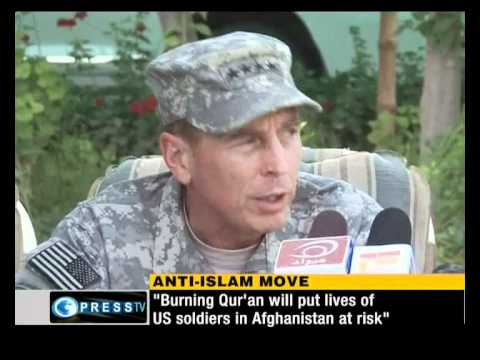 Every day for the past few days there have been demonstrations in Afghanistan against the scheme of the Christian fundamentalist Dove World Outreach Center in Gainesville, Florida, to burn copies of the Qur’an on September 11. This sort of grandstanding by a tiny congregation with global ramifications reminds us that in the contemporary world, technology magnifies the power of individuals and small groups, which is a real problem when they are hateful. (The evangelical leadership has scolded the group for this action).

The Kabul demonstrations have alarmed Gen. David Petraeus, who is attempting a gargantuan counter-insurgency project in Afghanistan, which depends for its success on America winning the hearts and minds of Afghan Muslims. He issued a statement on Monday deploring the Dove Outreach plan and saying, “It could endanger troops and it could endanger the overall effort in Afghanistan.”

It isn’t only Petraeus who is petrified by the way this auto-da-fe could spin out of control. The Catholic cardinal in Mumbai, India and an archbishop in Bhopal, Madhya Pradesh, have condemned the stunt, as well. Likewise, Christian leaders in Indonesia have jointly protested the Gainesville church’s plans. Terry Jones, the Dove pastor, appears to want to prove Muslims are intolerant by provoking them to attack ‘Christians’ over the burning of their scripture. I.e., he thinks just like al-Qaeda, which wanted to provoke Christians to attack Muslims so as to demonstrate Christian imperialism. If what you want to do is spread hate and produce dead bodies, that is easy. Sowing rancor and harvesting corpses is no harder than piling up garbage Producing love and tolerance and unity across ethnic and religious boundaries is what is hard, and it is very, very hard. The most difficult thing in the world, like balancing a pyramid on its nose. Which is why we honor the Gandhis and the Martin Luther Kings, who strive toward it on a large scale. What is worrisome is that technology is magnifying the power of tiny fringe hate groups to shape the world.

As I pointed out in late July, “The German poet Heinrich Heine (d. 1856), in his play lamenting the forced conversion of Spain’s Muslims to Christianity, “Almansor,” wrote, “Wherever they burn books, in the end they will burn human beings.” (When the Nazis burned books in 1933, Heine’s were among those set afire, and his prediction was borne out).” (For the full posting, click here).

A correspondent from Gainesville writes,

‘
As a long time resident of Gainesville FL, it pained me to hear this morning on NPR of a demonstration in Afghanistan against the 9/11 Quran burning here. We in Gainesville pride ourselves as being a progressive, tolerant and forward looking city. We also happen to be home of the small (less than 50) Dove Outreach church, a reactionary and publicity seeking outfit. Please, people of the world, know that this stunt has stimulated much pain and concern in our community. It has stimulated a lot of planning and dialogue, and there will be a variety of events to counter the proposed burning. There has been wildly inaccurate reporting about the event, with the Wall Street Journal repeating the false report that Dove is a “mega-church”. It is a micro-church, also run as a used furniture store . . . They are loving all the publicity, while the rest of our community can only look on in horror and try to come up with a cogent response. That this small group of wing-nuts have garnered so much publicity is a shame; hopefully we will make it through the week peacefully and come out with a community made even stronger. But to the world, we can only say we are sorry, and please don’t judge us by these bigoted few.’

One of the accusations that anti-Muslim bigots like the Dove group constantly make against the Qur’an is that it promotes vigilante violence. Nothing could be further from the truth. In fact, scholars of religion have found that the Bible is far more violent than the Qur’an.

In this regard, I’ll just reprint something I wrote earlier on the Qur’an.. (See also the links listed here.)

“Dangerous falsehoods are being promulgated to the American public. The Quran does not preach violence against Christians. [It does urge the early Muslim community in Yathrib or Medina to fight to defend itself against the genocidal campaign of the pagans of the west Arabian city of Mecca, who wanted to wipe out the Muslims and destroy monotheistic Islam. When verses in, e.g., Chapter 8, urge Muslims to fight the ‘infidels,’ they are referring to bloodthirsty polytheists, not to Jews and Christians, who I think the Qur’an never calls infidels without qualification.]

Quran 5:69 says (Arberry): “Surely they that believe, and those of Jewry, and the Christians, and those Sabeaans, whoso believes in God and the Last Day, and works righteousness–their wage waits them with their Lord, and no fear shall be on them, neither shall they sorrow.”

When speaking of the 7th-century situation in the Muslim city-state of Medina, which was at war with pagan Mecca, the Quran notes that the polytheists and many Arabian Jewish tribes were opposed to Islam, but then goes on to say:

5:82. ” . . . and you will find the nearest in love to the believers (Muslims) those who say: ‘We are Christians.’ That is because amongst them are priests and monks, and they are not proud.”

So the Quran not only does not urge Muslims to commit violence against Christians, it calls them “nearest in love” to the Muslims! The reason given is their piety, their ability to produce holy persons dedicated to God, and their lack of overweening pride.

The tendency when reading the Quran is to read a word like “kafir” (infidel) as referring to all non-Muslims. But it is clear from a close study of the way the Quran uses the word that it refers to those who actively oppose and persecute Muslims. The word literally meant “ingrate” in ancient Arabic. So the polytheists (“mushrikun”) who tried to wipe out Islam were the main referents of the word “infidel.” Christians, as we see above, were mostly in a completely different category. The Christian Ethiopian monarch gave refuge to the Muslims at one point when things got hot in Mecca. The Quran does at one point speak of the “infidels” among the Jews and Christians (2:105: “those who committed kufr/infidelity from among the people of the Book.”) But this verse only proves that it did not think they were all infidels, and it is probably referring to specific Jewish and Christian groups who joined with the Meccans in trying to wipe out the early Muslim community. (The Quran calls Jews and Christians “people of the book” because they have a monotheistic scripture).

People often also ask me about this verse:

[5:51] O you who believe, do not take Jews and Christians as friends; these are friends of one another. Those among you who ally themselves with these belong with them.

This is actually not a good translation of the original, which has a very specific context. In the Arabia of Muhammad’s time, it was possible for an individual to become an honorary member or “client” of a powerful tribe. But of course, if you did that you would be subordinating yourself politically to that tribe. The word used in Arabic here does not mean “friend.” It means “political patron” (wali). What the Quran is trying to do is to discourage stray Muslims from subordinating themselves to Christian or Jewish tribes that might in turn ally with pagan Mecca, or in any case might have interests at odds with those of the general Muslim community.

So the verse actually says:

[5:51] O you who believe, do not take Jews and Christians as tribal patrons; these are tribal patrons of one another. Those among you who become clients of these belong with them.

Since the Quran considers Christians nearest in love to Muslims, it obviously does not have an objection to friendship between the two. But apparently now it is some Christians who have that hateful attitude, of no friendship with “infidels.” ”