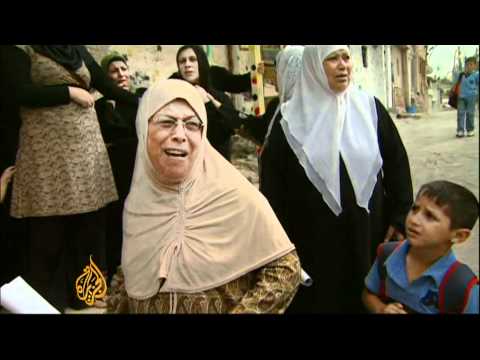 The poor Palestinians of East Jerusalem have few assured human or civil rights. Anyone may do anything to them at any time, and they have little recourse. They can be thrown out of property they legally purchased after 1948, and made to live in tents in front of their former residences; and then the tents can be demolished by Israeli police. Aggressive, larcenous Jewish squatters continually attempt to effect a slow-motion ethnic cleansing of the Palestinians, using fraud and sometimes force.

The 55,000 Palestinians of the Silwan area (formerly a village but now annexed to Jerusalem) are mad as hell and not going to take it any more. Three hundred militant settlers have been inserted in their midst on the basis of some fable that a legendary King David dwelled there in the 10th century BC (archeology has found Jerusalem largely uninhabited in that period and has never found firm evidence of a Jewish kingdom during that era or even that a David or Solomon existed; they are not mentioned in contemporary Assyrian sources).

It is as though hundreds of armed men showed up in front of your house and demanded you take your family and leave and give it to them because their ancestor was a king and he is buried deep under its foundations. But you have the same ancestors that they do! (Jerusalem was founded some 5000 years ago by the common ancestors of most Jews and Palestinians).

The Palestinians started throwing stones at the squatters on some provocation. But the squatters have private armed security guards (an increasing tendency worldwide for colonial ventures). One of the guards opened fire. The accounts are murky, but the guard appears to have killed two innocent bystanders, one a Palestinian father of five who was driving by. The private guard wounded another Palestinian, who appears to have been fleeing him.

The use of excessive force (live fire versus stone-throwing) angered the aggrieved Palestinians further, and they began demonstrating in the thousands in Silwan as the funeral was held Wednesday evening. The funeral procession, 1,000 strong, headed for a cemetery near the Wailing Wall and the al-Aqsa Mosque. Stone throwing broke out in that area and Israeli troops accosted the Palestinians driving them into the mosque.

The USG Open Source Center translates: ‘State-funded, independent Jerusalem Voice of Israel Network B in Hebrew adds at 1300 GMT: “Riots continue in East Jerusalem in the wake of last night’s killing of a Silwan resident by a security guard. Five civilians and four policemen were slightly injured. Young Arabs hurled rocks at two vehicles in which three Jews were driving in the vicinity of the Augusta Victoria Hospital. The three sustained slight injuries and were rescued by police. In Wadi al-Jawz, two bus passengers were injured as the bus was pelted with rocks. They were evacuated to Hadassah-En Kerem Hospital.

Earlier, four policemen were injured in riots in Silwan and in the course of the slain man’s funeral procession near Temple Mount. The rioters set on fire two Israeli cars parked near the Muslim cemetery.

“Left-wing activists report that police have dismantled a protest sukkah they had put up in the East Jerusalem neighborhood of Al-Shaykh Jarrah and detained an activist.”

Network B updates at 1400 GMT: “A short time ago, police forces entered the Temple Mount compound in the wake of the violent incidents that started after a Silwan resident was shot dead by a security guard last night and during his funeral. Our correspondent Efrat Weiss reports that the troops are deployed near Al-Aqsa Mosque but have not entered the mosque. ‘

The al-Aqsa mosque is sacred to Muslims worldwide, and the clashes could easily spin out of control and provoke much more trouble among Muslims than mere repression of Palestinians would. Remember that it was only when Sunni Arabs in Iraq destroyed the Shiite Golden Dome shrine in Samarra in February 2006 that the civil war began in earnest in Iraq. Attacking holy sites can provoke massive reprisals because of their deep symbolic significance to millions of individuals.

Al-Ayyam reports in Arabic that some Palestinians are demanding international intervention to stop the colonial practices being deployed against Silwan.

Philip Weiss reports from the scene

Some observers are worried that the violence in Jerusalem may derail the current peace talks between the Israeli government and the Palestine Authority. That would be irrational. The point of peace talks is to resolve ongoing conflicts, so of course this stuff is going on while talks proceed. If the talks are canceled, it will be because the Israelis don’t really want to make peace with the Palestinians, or because the Palestinians decline to talk while being actively stolen from.

An excellent account of Israeli policies toward Palestinian East Jerusalem and their deleterious impact on residents, especially children and families, is that of Joel Beinin at the invaluable “Middle East Report Online.

Let me just excerpt a few of the money grafs:

‘ Another settlement flash point is the Palestinian village of Silwan (pop. 55,000), which lies south of the Dung Gate of the Old City. . .

Silwan is one of the poorest parts of East Jerusalem. Its [Palestinian] residents pay the same taxes as Israeli citizens but receive few municipal services in return. There are no playgrounds, green parks, public libraries, sports facilities or public medical clinics. The dearth of public services depresses private investment — there are no cafés or cinemas, either. The settler takeover of tourist-related economic activities has further impoverished Silwan. An estimated 75 percent of its children live under the poverty line. . .

There, ancient claims of ownership based on archaeology are being used to dispossess the Arab inhabitants. The Elad Association, whose name is a Hebrew acronym for “To the City of David,” has been subsidizing excavations conducted by the Israel Antiquities Authority in Silwan since the late 1990s. . . Some Israeli archaeologists contest this biblical version of the area’s history, and to date no archaeological evidence of King David’s presence in the area or of the existence of a Temple on the scale described in the Bible has been found.

A videotape of a guided tour of the dig shows that Elad admits it is undermining the structural integrity of the homes of the Arab residents of Silwan. . .

Other[ Palestinians] who have lived continually in Silwan expanded their homes or built new ones for their growing families. Since the Jerusalem municipality rarely gives permits for construction by Arabs, they had to build illegally. Demolition orders have been issued for 88 homes sheltering some 3,600 people in the Bustan neighborhood to make room for the expanding settler presence. Elad has also used fraudulent deeds and purchases conducted through front men to acquire property. In 1992 an Israeli government investigation concluded that Jewish settler organizations had acquired Arab property in East Jerusalem using false affidavits, misapplication of the Absentee Property Law, illegal transfers of public property to private, ideologically motivated associations and illegal transfers of tens of millions of shekels in public monies to settler organizations.’