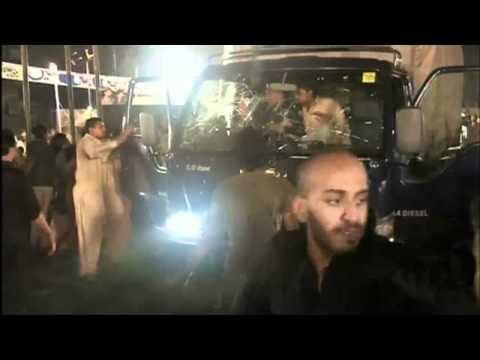 Three explosions hit Shiite processions in the old city of Lahore around 7 pm Wednesday, killing at least 35 persons and wounding about 250. The first explosion appears to have been a pre-set bomb, which went off near to the Karbala Gamay Shiite shrine. Two suicide bombers subsequently struck near Bhati Chowk. The attacks occurred near to the Datta Ganj Bakhsh Sufi shrine, which was bombed last summer.

Although the local police had set up checkpoints and taken basic security measures, the crowd blamed them for having allowed the bombings, and attacked them. They burned police cars and mobbed the nearest police station. Police had to fire in the air to disperse the angry crowds, which they only succeeded in doing around 8:30 pm. The 35,000 Shiites were commemorating the assassination of Imam Ali, who they consider to be the successor of the Prophet Muhammad, in 661. Ali’s shrine is in Najaf, Iraq.

Dawn reports that some in the crowd blamed Punjab chief minister Shahbaz Sharif and his party, the Pakistan Muslim League (N), for simply not caring what happened to Shiites. (The Muslim League is not a particularly fundamentalist party, though some of its members have those tendencies, but it has a bias toward conservative Sunnism, and party leader Nawaz Sharif had been in exile for many years in Saudi Arabia, the government and Wahhabi state religion of which is viewed by common Shiites as hostile to them). Lahore Shiites are divided politically, but a lot of ordinary Shiites would be supporters of the ruling Pakistan People’s Party; its de facto leader, President Asaf Ali Zardari, is himself a secular Shiite.

An Urdu newspaper reported that an organization called Lashkar-i Jhangvi al-Alami took responsibility for the bombings, though Lahore police said they had heard nothing about such a claim. The background and recent activities of Lashkar-i Jhangvi is given by the South Asia Terrorism Project. It is a small offshoot of the Army of the Companions of the Prophet (Sipah-i Sahaba). The anti-Shiite animus of these groups derives originally from the social conditions of the Jhang Siyal, where powerful Sufi Shiite landlords hold sway, and where lower middle class Sunnis feel oppressed by them. But over time the Lashkar-i Jhangvi has developed a presence elsewhere in the country, including in Karachi, where it is also accused of attacks on Shiites. It is one of a number of small terrorist organizations that have shadowy relationships with one another and which some observers call the ‘Punjabi Taliban,’ though I think that phrase generates more heat than light. They aren’t exactly like the Pashtun Taliban, and they are far smaller and more marginal in Punjabi society than the Taliban are in Pashtun.

The massive attack on Shiites in Karachi last winter, and then the targeting in Lahore since spring of an Ahmadi Mosque, of a Sufi shrine, and now of a Shiite procession, suggests a coordinated and concerted attempt by an organization of bigoted Sunni activists influenced by Saudi Wahhabism to impose a narrow Sunni fundamentalist vision on diverse Pakistani society.

The sectarian strife comes on top of continued extensive violence in the country’s northwest, where government sources claim that air strikes on suspected terrorist safe houses in Khyber district left 60 dead. Local sources confirm the strikes but say that as many as 20 of the 60 were innocent civilians, including children. Indeed, the strike on the Shiite mosque in Lahore may well be a reprisal for Pakistani Government crackdowns on the Pakistani Taliban.

And, of course, these incidents continue to be overshadowed for most Pakistanis by the Great Deluge that put a fifth of their country under water and threatens disease outbreaks, and lower economic growth and productivity.