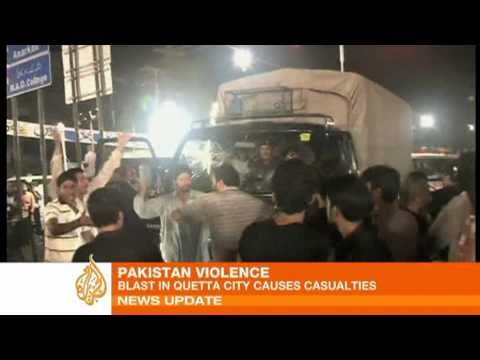 The death toll rose to 65 in Friday’s deadly suicide bombing of a Shiite rally in Quetta, the capital of Baluchistan province in Pakistan. The Shiites had been commemorating Jerusalem Day, in solidarity with the Palestinians. The city was paralyzed by a general strike called to protest poor security, and all schools were closed. Most of the victims were buried in a funeral ceremony at Marriabad cemetery. Some Shiites claimed that more people died in undisciplined police firing after the bomb went off than in the blast itself (though that allegation strikes me as implausible).

The attack came on the heels of a similar bombing in Lahore that also targeted Shiites, and is part of a pattern of attacks on Shiites, Sufis and Ahmadis, all Pakistani forms of Islam hated by the Salafi militant reform branch of Sunni Islam.

The recent bombings may have been made easy by the preoccupation of the Pakistani army with relief work for victims of the country’s almost cosmic flooding during the past month.

Gul Jammas Hussein has a a good piece on the strategy and motives of the hyper-Sunni groups carrying out these anti-Shiite bombings, though I don’t find his final ‘foreign hand’ possibility persuasive. I agree, though, it is odd that the Quetta Shiites were hit while marching for a Palestinian Jerusalem.