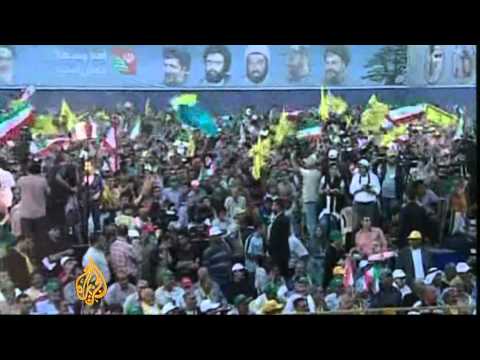 The USG Open Source Center translates from Persian the speech of Iranian President Mahmoud Ahmadinejad at Qana in South Lebanon on Friday (See below). Qana is significant as the site of several Israeli attacks and atrocities, most recently in summer 2006, in which Israeli bombing killed innocent non-combatants. Lead 9/11 hijacker Mohammad Atta was incensed by the 1996 Israeli bombing of Qana.

Ahmadinejad’s speeches in Lebanon have centered on defense, not offense, and he has several times suggested that the situation will improve when the 12th Imam, a descendant of the Prophet Muhammad, returns, alongside Jesus Christ. That is, he is speaking a mystical language of spiritual saviors at the end-time rather than talking about tanks.

Here is the speech:

In the name of God, the Merciful, the Compassionate. (Introductory prayers in
Arabic).

I thank God Almighty for granting me the opportunity to visit you pious, brave and revolutionary people.

My dear ones, you are victorious and your enemies are defeated. You will stay and your enemies, who are the enemies of humanity, are on the slippery slope to destruction.

You are honorable and respected and your Zionist enemies are shamed, wretched and pitiful. On behalf of the Iranian nation, I would like to congratulate you on your faith, resistance and love for justice.

I have come to tell you that the Iranian nation and leadership will stand by the people of Lebanon and Qana to their last breath. The martyrs of Qana are alive and the enemies of Qana are dead. The path of martyrs, the path of justice, purity and resistance against oppressors is everlasting.

(Sentence in Arabic meaning: Dear Lebanese people, Dear honorables, we are proud of you and we will be with you always.)