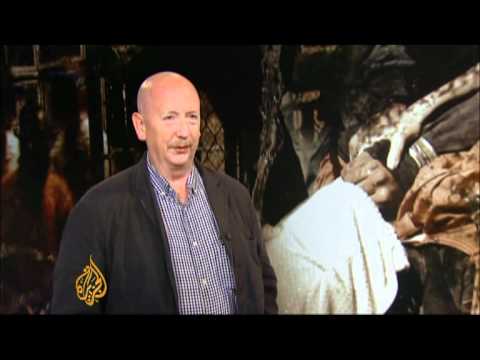 The American Civil Liberties Union is calling upon the Attorney General to look into prosecuting George W. Bush now that the latter has admitted to authorizing torture (i.e. waterboarding) at Guantanamo.

British officials have have denied Bush’s allegation that torture techniques yielded information that foiled terror plots in the UK.

Aljazeera English has a video report, which in part blames Alan Dershowitz for helping create an atmosphere in which the Bush administration could pursue this path:

Waterboarding is torture both in the US federal code and as recognized by decades of customary practice in the US.

Here is the US law on torture:

‘ (1) “torture” means an act committed by a person acting under the color of law specifically intended to inflict severe physical or mental pain or suffering (other than pain or suffering incidental to lawful sanctions) upon another person within his custody or physical control;

(A) the intentional infliction or threatened infliction of severe physical pain or suffering;

(C) the threat of imminent death; or

(D) the threat that another person will imminently be subjected to death, severe physical pain or suffering, or the administration or application of mind-altering substances or other procedures calculated to disrupt profoundly the senses or personality…’

The framers of the law on torture clearly could just not imagine that US politicians would order it while they are still in this country:

‘ (a) Offense.— Whoever outside the United States commits or attempts to commit torture shall be fined under this title or imprisoned not more than 20 years, or both, and if death results to any person from conduct prohibited by this subsection, shall be punished by death or imprisoned for any term of years or for life.

(b) Jurisdiction.— There is jurisdiction over the activity prohibited in subsection (a) if—

(1) the alleged offender is a national of the United States; or

(c) Conspiracy.— A person who conspires to commit an offense under this section shall be subject to the same penalties (other than the penalty of death) as the penalties prescribed for the offense, the commission of which was the object of the conspiracy. ‘

If I were Bush, I wouldn’t vacation in Barcelona.