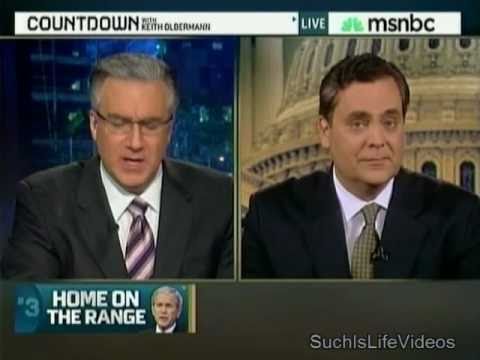 Keith Olbermann interviews Jonathan Turley on London mayor Boris Johnson’s warning that if Bush comes to Europe to flog his ‘memoirs’, he might be arrested.

‘ It is not yet clear whether George W Bush is planning to cross the Atlantic to flog us his memoirs, but if I were his PR people I would urge caution. As book tours go, this one would be an absolute corker. It is not just that every European capital would be brought to a standstill, as book-signings turned into anti-war riots. The real trouble — from the Bush point of view — is that he might never see Texas again.

One moment he might be holding forth to a great perspiring tent at Hay-on-Wye. The next moment, click, some embarrassed member of the Welsh constabulary could walk on stage, place some handcuffs on the former leader of the Free World, and take him away to be charged. Of course, we are told this scenario is unlikely. Dubya is the former leader of a friendly power, with whom this country is determined to have good relations. But that is what torture-authorising Augusto Pinochet thought. And unlike Pinochet, Mr Bush is making no bones about what he has done. ‘